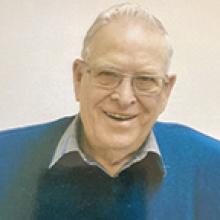 It is with deep sadness that we announce the passing of Allen Elwood McCulloch, age 95, on Thursday, April 21, 2022, at the Brandon Regional Health Centre.
Allen was predeceased by his mother, Mary Ching, his wife, Dorothy (Conner) McCulloch and his younger brothers, Melvin (Cynthia) and Cecil (Arlene). He is survived by his son, Bob (Nancy), daughter, Judith, granddaughters, Lindsay and Madison (Brian) and great-granddaughter, Maren. It was a blessing that he was able to meet and enjoy his first great-grandchild in the year of his passing.
Dad taught school for over 45 years in McConnell, Morden, Beausejour and Manitou (where he and Mom resided for over 25 years, and he tended to his beautiful rose garden). He enjoyed hearing about (and keeping up with) the accomplishments and exploits of his many students over the years. He was a talented wood carver, handyman, artist and golfer. He lived in Treherne since 2002 in The Villa, where he met many neighbours who became good friends and in the last few years, where he was extremely fortunate to be in the loving care of his daughter, Judith. His body had recently failed him, but his mind remained sharp and engaged (when he felt like wearing his hearing aids). He was kind, gentle, laid back and both respectful and respected. He enjoyed all sports and followed the Winnipeg Blue Bombers, Winnipeg Jets, Toronto Blue Jays and most importantly, the various hockey and other sports teams Lindsay and Madison played on. The best times in his life were spent with his family especially at Christmas time, when he was annually in charge of salvaging bows and ribbons and starring in ultra-competitive card games for over 30 years.
Cremation has taken place. A private family ash interment will be held at the Hillside Cemetery, Morden, MB, presuming there is a spring this year.