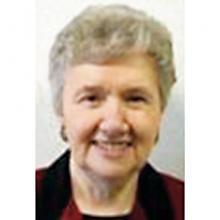 
On the morning of April 29, two weeks before her 90th birthday, Helen Thiessen (nee Isaak) passed away peacefully at Donwood Manor in Winnipeg.
Helen was born in a Mennonite settlement in Ukraine on May 12, 1932. She eventually settled in Winnipeg, where she met Abram Thiessen, whom she married on April 30, 1955. They were married for 52 years and had three children: Victor (1956), Carolyn (1957) and Walter (1961). Helen dedicated herself to bringing up her children and creating a welcoming home environment.
Helen was predeceased by her husband Abram, her brothers, Gerhard, Jake and Peter, and her sisters, Tina and Mary. She is survived by her sisters, Luise and Nita, her children, Vic, Carolyn Kessler (Brian) and Walter (Carol), seven grandchildren and five great-grandchildren.
The funeral will be held at Springs Church, 725 Lagimodiere Blvd., at 11:00 a.m. on Tuesday, May 3, with Pastors Leon Fontaine and Jeff Romas officiating.
In lieu of flowers, donations can be made to Springs Church or Miracle Channel.