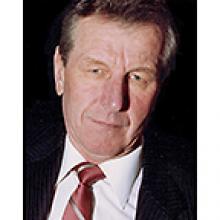 
On April 28, 2022, at Actionmarguerite Personal Care Home in Winnipeg, Canada, John passed away peacefully at the age of 94 years.
He leaves behind children, Christine, Anthony, Stanley (Brenda), Helen and Irene, grandchildren, Lee, Jake, Zack, Travis, Samantha, Amber and Jaclyn, and numerous other relatives and friends. He was predeceased by his loving wife Lucy, parents, Walenty and Franciszka, and siblings, Wladyslawa, Antoni and Aniela.
John was born Jan Piechuta on the family farm near Sokolow, Poland in 1928. As a child, he attended school in the nearby town, while also contributing significantly to the farm's operation. All this forever changed with the outbreak of war in 1939, and deportation of his family to a labour camp in northern Russia in 1940, where he lost his father and brother to disease. This led John to leave his studies at the makeshift school and commence work with adults to help earn the credits necessary for the family to eat and survive. Although a challenging and tragic time in his life, John never lost his sense of hope or faith in humanity. Much later, he occasionally shared stories of adventure in the Russian wilderness.
When a brief amnesty was declared in late 1941, his family was allowed to immigrate to Uzbekistan in southern Russia. There, John enlisted in the Polish JSK cadet program, while his family continued their journey to refugee camps in East Africa. John remained in this cadet program at various locations in Israel, until the war ended in 1945, and then continued to the Polish Merchant Navy College in England, where he studied until 1947. Then, as a qualified seaman, he began a five year career on various ocean freighters that took him to all corners of the globe.
John reunited with family in Winnipeg in 1952 and began a 40 year career with Dominion Bridge Co. There, he managed construction teams that built innumerable structural steel bridges, buildings and towers to serve a diversity of infrastructure needs.
Canada provided John with an abundance of opportunities. Here, he met his loving wife Lucy, and together they raised their family in a manner that embraced the Canadian culture and experience, but also honoured their shared Polish heritage. John and Lucy enjoyed socializing with friends, ball room dancing, travel, camping, fishing, reading, and daily walks. Later on, they developed a unique cottage at Steep Rock on the shores of Lake Manitoba, where they thoroughly enjoyed the serenity, simplicity, solitude and beauty.
John's spirituality and trust in God were ever present in his life, and provided him the courage and strength to endure the difficult times and appreciate the good. He exuded a confident, yet humble charisma, and his strength of character drew people toward him. John possessed a firm manner as a father, yet readily gave of his time and his wisdom. He shared generously with family, friends and charities, even if it required tempering his own personal aspirations.
Mass of Christian Burial will be celebrated on Thursday, May 5, 2022 at 12:00 p.m. at St. Andrew Bobola Church, 541 Marion St. with visitation commencing at 11:00 a.m. and rosary being said at 11:30 a.m. Interment to follow at Glen Lawn Memorial Gardens, 455 Lagimodiere Blvd.
In lieu of flowers or gifts, your prayers and thoughts are appreciated.