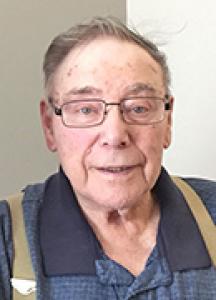 SHORT, James Henry With great sorrow we watched him go. Jim entered into rest Sunday, April 24, 2022 at Actionmarguerite Saint-Boniface, Winnipeg. Jim was born at Mayfeld, MB on February 29 1936, to Walter and Margaret Short. He grew up in the Mayfeld and Pine Creek Districts and attended Pine Creek School. Jim Married Jessie Walsh December 22, 1959. They lived in Mayfeld for two years before moving to Helston in 1961, Gregg (North Cypress) in 1973 and finally to Carberry in October of 1990. Jim was on his own at a young age and worked at various jobs until in 1951 when, at the age of 15, he was hired by CN Rail as a water boy on one of the gangs. Jim worked for CN for over 38 years as a Labourer, Tamper Operator and later the Maintenance Forman at Gregg, MB where he retired in September of 1989. As a young man Jim taught himself to play the guitar. He practiced while living on the gang cars and sang to entertain himself and his work mates in the middle nowhere. He played at home for his family and, while singing with his children, he played at many local concerts at Helston, Edrans and Gladstone. In his 70's Jim played with a group in Carberry that brought a lot of joy to seniors around the local area. After retirement Jim worked for local farmers and at the Carberry dump and took a small engine course, fixing lawn mowers, snow blowers and many other things for his friends and neighbors. Jim was a lifelong member of the Carberry Elks, joining after he moved to Gregg. The Elks were such a huge part of his life, especially after he retired. He spent many hours meeting and talking to people while selling raffle tickets, hams and calendars, and helping to keep the booth going at the Carberry Fair. Jim was predeceased by: his wife Jessie (Walsh), January 2008; father Walter and mother Margaret (Finlinson); brothers and sisters Bill (Eva), Mona (Sterling), Eric (Vi), and Frances (Ed). He is survived by his sister Shirley (Phil), Winnipeg.; children Heather (Scott Malyon), Winnipeg, Richard (Dianne McCormack), Douglas, MB, Mark (Heather Tole) Winnipeg, and Perry, Blenheim ON; grandchildren Michael Smith (Kalynn Chess), Winnipeg, Laura May, Winnipeg, Laura and Ian Malyon, Winnipeg; Damon Short Brandon, Nolan Short Winnipeg, and Aaron Short, Bowman-ville ON; Dylan Short and Alexanra Short, Blenheim ON; great-grandchildren Silas and Lilly Smith Winnipeg, Sophia May, Winnipeg, and numerous nieces and nephews. A memorial service will be held at 1:00 p.m. Monday, May 9, 2022, at Carberry United Church. A private family interment will take place at a later date. Jim's family would like to thank all of the individuals at Actionmarguerite who showed such compassion in caring for him the last three years of his life. In lieu of Flowers donations can be made to the Alzheimer's Society of Manitoba, The Carberry Elks, Action-marguerite Saint-Boniface or a charity of your choice.