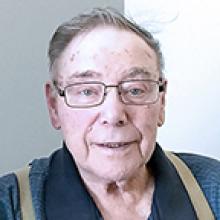 
With great sorrow we watched him go. Jim entered into rest Sunday, April 24, 2022 at Actionmarguerite Saint-Boniface, Winnipeg.
Jim was predeceased by: his wife Jessie (Walsh), January 2008; father Walter and mother Margaret (Finlinson); brothers and sisters, Bill (Eva), Mona (Sterling), Eric (Vi), and Frances (Ed). He is survived by his sister Shirley (Phil), Winnipeg; children, Heather (Scott Malyon), Winnipeg, Richard (Dianne McCormack), Douglas, MB, Mark (Heather Tole), Winnipeg, and Perry, Blenheim, ON; grandchildren, Michael Smith (Kalynn Chess), Winnipeg, Laura May, Winnipeg, Laura and Ian Malyon, Winnipeg; Damon Short, Brandon, Nolan Short, Winnipeg, and Aaron Short, Bowmanville, ON; Dylan Short and Alexanra Short, Blenheim, ON; great-grandchildren, Silas and Lilly Smith, Winnipeg, Sophia May, Winnipeg, and numerous nieces and nephews.
A memorial service will be held at 1:00 p.m. Monday, May 9, 2022, at Carberry United Church. A private family interment will take place at a later date.
Jim's family would like to thank all of the individuals at Actionmarguerite who showed such compassion in caring for him the last three years of his life.