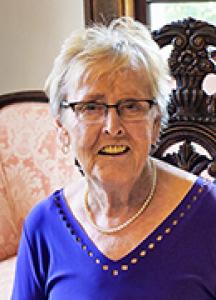 COWIE: The family of Annie (Anne) Marie Cowie is saddened to announce the passing of their mother, grandmother and great-grand-mother on Wednesday May 4, 2022 at Minnedosa Personal Care Home at the age of 93 years. Anne was born in Minnedosa, Manitoba on July 27, 1928 to Carl Albin Pearson of Boras, Vastra Gotaland, Sweden and Emmy Antoinette Carlson of Långemåla, Kalmar, Sweden. Carl and Emmy immigrated to Canada and settled in Minnedosa where they set about raising nine children. Annie was the youngest and was the last surviving member of this remarkable Pearson clan. They are Elsie, Della, Florence, Dorothy, Dagmar, Margaret, Arthur, and Axel. Anne married Donald James Arthur Cowie of Brandon in 1950 who predeceased her in 2004. She is survived by her children, grandchildren, and one great grandson: Gerald (Pierrette) (Andrea/Jason, Tia/Dave, Benji); Stuart (Jo-Anne) (Neil and Iain) and Barbara Currey (David) (Emma and Michael). Her legacy lives on through the six grandchildren, one great-grandson and too many nieces and nephews to count. Anne attended Roseneath School in the municipality of Odanah. After graduating grade 12 she was accepted into the Brandon School of Nursing, where she was a proud graduate. She began her career as an RN at Brandon General Hospital on 200 in the Maternity Ward. She eventually went to part time work in Recovery until she retired in 1993. She enjoyed golfing and curling. She served on the Wheat City Ladies Golf Committee and curled at the Wheat City Curling Club. Anne and Don travelled often to Phoenix, Arizona to visit her three sisters and they always took their golf clubs. They also travelled to California to visit friends and spent many hours on the golf courses there as well. She took up skiing at 41 and made numerous trips to Banff to ski with family and friends. She and Don enjoyed travelling and created many memories from their trips locally and around the world. Mom made her famous Christmas cake every year and gave them as gifts. We all remember the bags of cheesecloth hanging in the basement while the juice dripped from the crabapples for crabapple jelly. She enjoyed the times she could get together with her sisters to make Swedish dumplings and eat pickled herring. As of January 2021, she has enjoyed watching her only great grandchild grow up to be a busy toddler. Mom always looked beautiful dressed in her gowns and long white gloves for the military balls, hospital functions and Lions Club special events. She hosted and opened her home on Kensington Crescent to many friends and groups travelling through Brandon. In lieu of flowers, donations in memory of Anne Cowie can be made to the General or Activities Fund at Minnedosa Personal Care Home, PO Box 960, Minnedosa, Manitoba, R0J 1E0. A Graveside Service will be held at the Brandon Cemetery Columbarium on Wednesday, June 1, 2022 at 1:00 p.m. with Rev. Doug Craig officiating.

Messages of condolence
may be placed at
www.brockiedonovan.com.