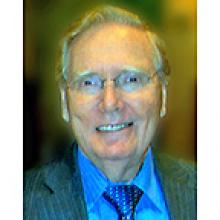 
Dr. Gordon Bruce Griggs February 18, 1934. Surrounded by family, Gordon passed peacefully into the arms of his loving Saviour, Jesus Christ on May 9, 2022.
Gordon leaves behind his beloved wife Betty, daughter Janet Keena (Greg), grandchildren, Jacqueline and Jessica, daughter-in-law Glenda Griggs, grandchildren, Bryce and Manon, Braedon and Shelby, daughter Catherine Doerksen (Craig), grandchildren, Jennifer and James, daughter Karen Grooters (Rory), grandchildren Joshua, Mariah, and Victoria, sister Eileen Raisbeck, sister-in-law Julie Griggs. He is predeceased by his son David; siblings, Earl Griggs, Louise Doerksen, William Griggs; and brother-in-law Keith Raisbeck.
Gordon's unwavering faith in the Lord, his love for his wife and family and his passion for medicine were the true joys of his life.
Gordon met Betty in 1955 and they were married in June 1957. They enjoyed a happy and fulfilled, Christ-centered marriage of more than 64 years. They spent summers at Manhattan Beach Retreat Centre a.k.a. "Grandpa's Lake" with all the children and grandchildren every summer. Many vacations were spent together in Scottsdale, Arizona.
Gordon served on the Boards of Calvary Temple, Manhattan Beach Retreat Centre, and Pentecostal Campus Ministries for many years. Gordon was involved in church ministry throughout his life and especially enjoyed teaching the 15 year-old boys Sunday school class.
Gordon was an avid curler and played on Mixed and Men's curling leagues for many years.
He grew up in Griswold, Manitoba, attended Brandon University, and was accepted into medicine after his third year of science. He attended the University of Manitoba and completed his medical degree in 1958.
He practiced medicine in Winnipeg, Elkhorn and Morris before settling in Winnipeg and establishing his family practice. He assisted in surgery at the Grace Hospital and was the Medical Director for several personal care homes throughout his career.
He was committed to lifelong learning and practiced medicine for 59 years, retiring in 2017. In 1974, he received his residency in family practice in Canada. He also attained his board certification through the American Academy of Family Physicians (AAFP). He was awarded a Fellowship designation from the College of Family Physicians of Canada, and also received the Care of the Elderly certification in 2015.
He will be dearly missed by his family.
A celebration of Gordon's life will be held on Saturday, May 14, 2022, at 11:00 a.m. at Calvary Temple, 440 Hargrave Street.


Thou wilt keep him in perfect peace,
whose mind is stayed on thee;
because he trusts in thee.
Isaiah 26:3