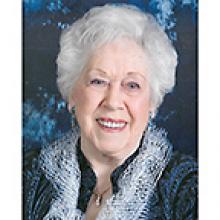 
It is with great sadness and heavy hearts that Grace's family announces her peaceful passing in the early hours of May 7, 2022, just six months short of her 100th Birthday.
She will be missed and lovingly remembered by her family: sons, James (Linda) and Brian (Louise); grandchildren, Michelle (Nicolas), Jamie (Tara), Mike (Meagan), Christine (Gabe); great-grandchildren, Alexandre, Myriam, James, Sadie, Sawyer, Teagan, Connor, Nathaniel, and Daphne; brother Robert (Heather); and many nieces and nephews. She was predeceased by her parents, Frederick and Elizabeth Austin; brother Fred; husband James C. Johnston (1947-1969); husband Raymond K. Thurlbeck (1977-2016).
Mom was born and lived her entire life in Winnipeg. In her early years, she lived through the Great Depression and the Second World War. James and Brian were born during her marriage to James Johnston which was shortened by his illness and death in 1969. But as she always did, she continued on with strength and dignity finding comfort in her many friends and family. Mom worked for the Federal Government for 22 years. In 1977, she married Raymond Thurlbeck and they retired together a few years later. They travelled the world and dedicated lots of time to the Shrine and the Daughters of the Nile. Mom received her 25 year pin in 2016. Sadly, Ray passed away in late 2016, but once again Mom persevered. Her strength, determination and strong will can easily be seen living on in her grandchildren and great-grandchildren.
Mom had great memories of her early years and kept many keepsakes along the way. She was devoted to her family and always a caring friend. She was an avid reader and always kept in touch with everything going on in the world. There are many people waiting for Mom's arrival, both friends and family. She has missed them all greatly and will love seeing them again.
The family would like to thank Mom's doctors and the wonderful, caring staff at the Grace Hospital.
In accordance with her wishes, Mom will be cremated, and we will be having a the Celebration of Life for her in Fall, closer to her 100th Birthday. Details will be found on the Green Acres website as they become available.