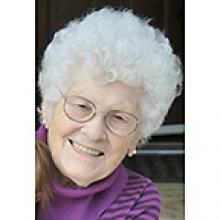 
Jo lived in a generation that witnessed tremendous change and advancement. She was born in a tiny house with no running water or electricity on a farmstead in Foley, Manitoba on May 6, 1923, and was the seventh child and second daughter of Anna and Michael Wawryk. Her parents immigrated to Canada from Poland and Ukraine in the early 1900s and accepted free land to farm from the government. Times were tough living off of the land in a small, isolated area of rural Manitoba but family life was treasured with her siblings, John, Marion, Nick, Paul, Peter, Steve, Walter, and baby William, all of whom predeceased her.
In time, Jo caught the eye of Frank Swirski. It was at a school sports meet where Frank, a star athlete, also caught Jo's attention. Frank and his seven siblings lived on a farmstead in Matlock, Manitoba with their parents who had emigrated from Poland and Ukraine as well. Frank was an excellent skater and was approached by an NHL farm team for tryouts but his father insisted Frank stay on the farm.
Frank and Jo married in 1942 and lived on his family farm for 20 years. They were very community-minded with Frank helping build Matlock Hall and Jo volunteering to clean the local church each week. Frank farmed, hauled gravel, and did highway work and Jo raised their five children while selling chickens, eggs, milk and cream, and taking in the local teachers as boarders. Life on the farm was a lot of hard work, but happy.
In 1967, Jo and Frank moved to Winnipeg in order to give their children greater opportunities. Jo, with limited formal education, began an astonishing career. She worked at Middlechurch (Personal Care) Home for a number of years as a nurse's aide and receptionist. She then worked for the Sisters of the Good Shepherd at Marymound School as a child care supervisor before taking over their halfway house in Winnipeg, where she housed and nurtured eight at-risk teenage girls at a time. Over the years, Jo would become "Mama Jo" to dozens of girls, many of whom would come back to see her long after leaving. She loved her work and when she retired after 19 years, she continued on as a respite worker.
After fully retiring, Jo and Frank moved to Westbank, BC, and then to Langley, BC with their youngest son, Mark, and his family with whom they lived for many years. Even though she lost Frank in May 2006, Jo remained fiercely independent and only moved into a retirement home at the age of 94.
Above all, Jo's greatest joy was her family. As driven as she was herself, she tirelessly encouraged us to work hard and succeed, wanting us to have better lives and more opportunities than she had as a young girl. Jo loved to read, especially articles related to health care and children which she eagerly shared with her own children until the last few years when sadly her eyesight was failing. She spoke with at least one of her children daily and although we were all separated by miles, we maintained close contact. She thoroughly enjoyed visiting us often in Calgary, Fort McMurray, Winnipeg, and Huntsville, Ontario.
Jo passed away May 7, one day after her 99th birthday and 16 years to the day after Frank. She leaves behind five children, Gary (Marycruz) of Mexico, Gayle of Winnipeg, Sherisse (David) of Huntsville, Shelley (Ernst) of Priddis Greens and Mark (Gay) of Langley. She also treasured 11 grandchildren, Vincent Swirski, Lindsay Caul (Jason), Joshua Swirski, Robyn Gibson (Andrew), Graham Borgfjord, Erin Ayres (Benjamin), Devon Cownden (Kristina and Kai), Chase Cownden (Leanne), Ciara Cownden-Neave (Dom), Haeden Swirski and Mikayla Swirski (Jeremy). She was further blessed with six great-grandchildren, Isabella Caul, Kennedy and MacKenzie Gibson, Isadora and Evelyn Ayres, and Mia Swirski. Jo will also be missed by her friend and caregiver, Jenny Davis, Peter Borgfjord, and one sister-in-law, Helen Kreamer, of Selkirk, Manitoba.
Services will be held at Our Lady of the Lake Catholic Church, Winnipeg Beach, Manitoba at 10:00 a.m. on Tuesday, June 14 with a Celebration of Life to follow at Matlock Community Hall, Matlock, Manitoba.
In lieu of flowers, donations may be made to JDRF (Juvenile Diabetes Research Foundation) in her name. We would like to sincerely thank all the staff of Rosewood and Marrwood Long Term Care in Langley, BC for caring so lovingly for Jo over the past several years.