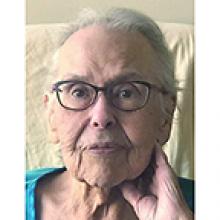 The final move is complete.
She is in her forever home.


After a particularly difficult two and a half years, we are saddened to announce the passing of our dear Maman, Dolorès Laurendeau (née Beauchemin) on April 30, 2022.
Maman is survived by her children: Jocelyne, Rachel (Derek Plas), Marcel (friend Kennis Fung and her daughter Alice), Jean-Louis (Cynthia Plett), Lynne (Martin Ross); her cherished grandchildren: Danika, Corin, Nicole, Julie, Madeline, Abby, Jack, and Ayah; sisters-in-law: Jeannine Beauchemin (late Denis), Jeane Beauchemin (late Roméo), Marie-Anne Bruce, and June Laurendeau; along with numerous nieces and nephews and many friends.
She was predeceased by her husband Louis in 2010; her parents: Joseph and Béatrice (née Jeannotte); special grandson Matthew; brothers: Lionel (late Adrienne Carrière), Roméo, and Denis; sisters: Lucile Carrière (late Oswald), Simone Roy (late Jean-Baptiste), and Denise in infancy.
She was born and lived the greater part of her life in Ile-des-Chênes. Maman earned her teaching certificate from Provincial Normal School in 1956, but soon discovered that she was not suited to the field of education. She married our Papa in 1961 and devoted many years to raising the family through many challenging times. Once we were older Maman started her 25-year career as part-time assistant at the local Canada Post Office.
Maman was happiest when she was able to care for people - her children when they were young, her mother when she became elderly, and our father when he became too ill to care for himself.
Toujours fidèle à sa foi Catholique et à sa langue, Maman a servi sa paroisse et communauté comme membre active de plusieurs organisations ainsi qu'au sein de l'Union Nationale Métisse St. Joseph comme trésorière pendant 17 ans. Sa passion pour la généalogie évoquait en elle des sentiments de fiérté et d'admiration pour ses encêtres métisses - les familles Beauchemin, Poitras, et Carrière
An avid reader, and crossword enthusiast in later years, she enjoyed the simple things in life - watching and feeding birds, gardening, sitting around a bonfire with family and revelling in the beauty and majesty of God's creation. Daily TV Mass became an integral part of her routine, and the highlight of her day in the final years of her life.
Our mother had a generous, caring, patient nature with others but was frugal when it came to herself. She had special concerns for the mentally and developmentally challenged, underprivileged, and the marginalized in society.
The family would like to extend special thanks to her friends who kept in touch, to the ladies who brought her weekly communion, and especially to the dear nieces and nephews who called her and helped her remain independent in her home for as long as possible. An extra special thanks to the staff on the 3rd Floor at Actionmarguerite (Saint-Vital) Inc. for the care and compassion she received during her short stay.
In lieu of flowers, donations to Actionmarguerite (Saint-Vital) Inc., Canadian Cancer Society, or any charity that you hold dear, would be appreciated. If you wish, when the weather gets nicer, have a bonfire and think of her. She will be there in spirit.
Cremation has taken place. As per her request, a private Funeral Mass was held at l'Eglise Notre-Dame-de-la-Miséricorde Church, and private interment of her cremated remains will follow at a later date.