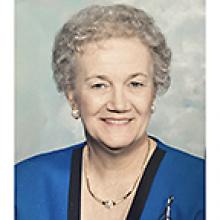 
On May 6, 2022, at Tuxedo Villa, our kind and beautiful mother, Constance Grace McLeod, peacefully passed away, three-days shy of her 91st birthday.
Connie was predeceased by her beloved husband Robert Alan McLeod (2014); parents, Ernest Frederick Goodison and Margery Grace Graham, sister Gloria Prescott, and brother Stanley Goodison in infancy. Connie will be greatly missed by her four children: Bruce (Debby); Gordon (Debbie); Glen (Barb); and Carolyn (Ian Sundby). Connie was also immensely proud of her nine grandchildren: Shawna, Heather, Paula, Cameron, Carla, Katie, Allan, Christie and Graham, as well as her eight great-grandchildren: Jayce, Wren Constance, Ethan, Charles, Hannah Grace, Juno, Connor and Louis. Connie is also survived by many cousins, nieces and nephews, and their families, all of whom treasure fond memories of times spent with Connie.
Constance Grace Goodison was born May 9, 1931 at the Misericordia Hospital. Connie had a happy childhood growing up in the West End, and attended Greenway and General Wolfe Schools, and Daniel McIntyre Collegiate. At one point in her teens, all four of Connie's grandparents lived with her in the large family home on Sherburn Street, having moved-in from the country when age and declining health made farm work impossible. In those days Connie eagerly listened to the many stories about "olden times" recited by her grandparents, and later passed those stories down to her own children. In 1948, Connie met the love of her life, Robert McLeod. They met at a barn dance, and it subsequently took persevering Bob six phone calls (he always said there wasn't going to be a seventh) to convince Connie to go on a first date. Connie and Bob fell in love and were married in 1952 at Harstone Memorial United Church, where Connie and her mother were the church organists.
Music was a lifelong passion for Connie. Just as her mother before her, Connie was an accomplished vocalist, pianist and church organist. Besides accompanying numerous soloists and choirs over the years, Connie took great enjoyment for many years (perhaps as a respite from her four children) playing piano with the St. James Pops Orchestra. She especially enjoyed family sing-alongs around the piano. Connie had a keyboard in her seniors residence and played beautifully until her final years.
Connie was a very kind soul, deeply intelligent with a love of learning and an insatiable curiosity about the world around her -- which she instilled in her children. But Connie's main love was family. She loved us all and was very good at communicating her love. The doors of the family home on Winchester Street were always wide open, not just to family but to an endless stream of friends of her growing children. She loved to cook, especially for others, and was always searching for new and healthier recipes. Her favourite dishes included produce from the large garden plot on Silver Avenue that Connie and Bob fruitfully planted and tended each summer for several decades. Connie's love for family also led her to begin researching family history in the pre-Internet days of the 1980s, and this became one of her great interests. In their retirement years Connie and Bob combined this interest with their passion for travel, involving numerous trips to various locations in the USA, southern Ontario, England and Scotland. Along the way they were always thrilled when their travels led them to a family member they hadn't previously met.
As her children grew older, Connie also began working outside the home. Some may remember her as the friendly face at the office of Dr. Murray McLandress (Winnipeg Clinic), or later as the office manager at Elanco on Pembina Highway.
Connie and Bob loved people, and were very sociable. Many will remember Connie as an active member in many of the organizations she was involved with: Deer Lodge United Church, Sturgeon Creek United Church, Khartum Ladies Auxiliary, Daughters of the Nile, the Clan MacLeod Society, Manitoba Genealogical Society, and the Sons of Scotland, among others. Connie and Bob also enjoyed the company of their neighbours and friends at the summer cabin at Laurentia Beach, and as a family we all treasure the fun-filled memories of the many family gatherings there each summer.
Connie survived both colon cancer (diagnosed 2008) and a recent case of Covid-19, but in the end she simply passed away quietly in her sleep, without pain or discomfort. She was happy and cheerful to the end, and at peace with herself and her loved ones. In our hearts we know that Connie and Bob are now reunited. Connie lived a beautiful life, and we will cherish her memory forever.
Thank you to all the staff at Extendicare Tuxedo Villa, who've gone above and beyond in caring for Connie and all the other residents throughout the current Covid-19 pandemic.
A private family service for Connie will be held this summer. Arrangements through Chapel Lawn Funeral Home. Flowers gratefully declined. Donations in memory of Connie may, if you wish, be made to CancerCare Manitoba. Make a donation to