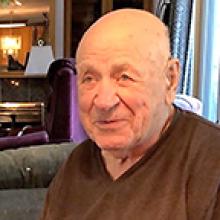 
Victor took his last flight on May 2, 2022, this time to heaven. After 92 years, we never expected this day to come, for after every surgery and illness, he usually came back stronger than ever.
Victor was a storyteller and frequently spoke of his early years growing up in Winnipeg Beach, working in the mines, his own service stations (Roco and Vic's Esso), Bristol Aerospace and Air Canada and most importantly, flying, fishing and hunting. A man who always said there is no such word as "can't" could build or modify nearly anything. He spent countless hours building and rebuilding floats and planes and then test flew them himself. He treasured his fly-in camp he built at Family Lake near Little Grand Rapids, spending time with his poochie Molly at Caddy Lake, and food! Victor loved life and had big plans for the summer, after not working all winter in his garage in St. Andrews, for the first time ever.
Married to Anne for 68 years, together they raised Debbie, Brenda and Robert (Paula) and enjoyed grandchildren/great-grandchildren, Victoria, Rebecca, Kyle, Ryan, Isla and Keenan.
A special thank you to our Home Care angels who listened to his stories and all the healthcare workers he encountered over the years.
Donations in Victor's name can be made to the Health Sciences Centre Foundation or the Interlake Eastern Health Foundation.