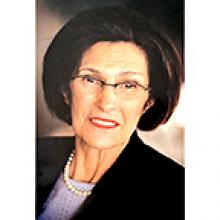 
It is with heavy hearts and deep sadness that we announce the passing of Gertrude Matas (nee Smith), beloved wife, auntie, and great-auntie on May 5, 2022.
Gertie will be lovingly remembered and deeply missed by her niece Rochelle Nozick, and her great-nieces, Jennifer Ritter (Alan), Kimberly Nozick and her great-nephew Joshua Nozick (Emily). Gertie is also sadly mourned by her great twin nieces, Brianna and Madeline Ritter and her great-niece and great-nephew Scarlett and Cody Nozick.
The Rabbis explain that there is more than one way to be a parent in this world. In the Talmud, Rabbi Joshua refers to Saul's daughter Michal as bearing a child. In fact, this child was borne by her sister Meirav. The Rabbi explains that one who helps to raise a child as one's own child is regarded by Scripture to have given birth to that child. Similarly, Gertie helped raise us and was our second mother and grandmother.
Gertie was predeceased by her parents, Rose and Daniel Smith, her husband Max Matas, her twin sister Minnie Shnier (Max), sisters, Sarah Jacobson (Dave), Tiny Diamond (Harold), and brothers, Max Smith (Claire), Art Smith (Selma) and Harry Smith (Ruthie). She is survived by many nieces and nephews on the Smith, Shnier and Matas sides of the family.
Gertie was born January 6, 1921 at her home at 133 Machray St. She attended Luxton and St. John's High School before going to United College and the University of Manitoba to study Home Economics. Gertie worked with her father Dan Smith and her brothers at the Metal Scrapyard.
Gertie was a Brown Owl for Girl Guides of America eagerly leading her Brownie Pack to earn their badges. She volunteered for Ort, National Council of Jewish Women, the Opportunity Store, and was an active member of Hadassah-Wizo working at the Hadassah Bazaar and Youth Aliyah events.
Gertie was a wife, sister, auntie and friend beyond measure. She was the first to help her siblings and many nieces and nephews whenever and however she could. Throughout the years, when those dear to her suffered with health problems, Gertie was a constant visitor and caregiver.
Gertie and her twin Minnie were two peas in a pod. Most could not tell them apart. They were nicknamed the Twin Babas. Safeway clerks, bus drivers, bank tellers all knew the friendly pair and asked about them over the years. McDonalds staff knew them by name. They had a memorable impact on everyone.
In her later years Gertie lived with her sister Minnie in their condo, and The Portsmouth. Then the two of them moved into the Simkin Centre so they could remain together. Gertie made friends at Simkin and sat on the Residents' Council to advise on behalf of other residents.
Gertie was a true lady. She lived with grace and dignity. She never complained in her 101 years and only had good things to say about everyone. She was truly grateful with her lot in life. After her twin Minnie's death, she showed her true strength and bravery. Outliving all her friends and family, Gertie is a true example of when the going gets tough the tough keep going. Gertie was the last woman standing, the end of an era.
Auntie Gertie, we were lucky to have you as our second mother and grandmother. We love you, we respect you, we admire your courage and we will miss you dearly.
The family is thankful to caregivers Gemma and Rico Tiglao, and Dr. Sheldon Koven, Alanna Kull, and the many nurses and aides on Weinberg 1 for providing constant support to Gertie over her last years. A special thank you to Sherryl and Soniya for their care and compassion during Gertie's last days.
Funeral services for Gertie were held May 8, 2022 at the Shaarey Zedek Cemetery, Rabbi Anibal Mass officiating. Pallbearers were Kim Nozick, Josh Nozick, Alan Ritter, Joel Remis, Gary Shnier and Daniel Shnier.
Should family and friends desire, contributions to honour Gertie's life can be directed to the Saul and Claribel Simkin Centre.