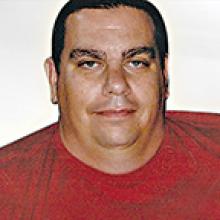 
David Francis, beloved husband, and best friend of Pam Francis (nee Jelfs) of Calgary, AB, passed away, with Pam by his side, on April 30, 2022, at the age of 55 years.
David was born in Edmonton, AB on October 8, 1966. He moved to Manitoba with his mom Arlene, and sister Lori, at the age of two. Dave graduated from the University of Manitoba with a B. Comm. Honours. He met Pam during this time, and they attended university together, both obtaining degrees in Finance. While attending university, Dave worked in the laundry department at the St. Boniface Hospital. Once he graduated, he worked at North American Life for several years, followed by Westfair Foods, and Profit Recovery Group. He and Pam were married in 1996, and one year later they relocated to Calgary where he continued to work for PRG for several years, and then worked as a Small Business Auditor for the CRA. After their daughter Emma was born in 2003, Dave took a leave from the CRA to care for her, taking her to therapy appointments, and doing hours of therapy with her at home. Once their son Noah was born in 2007, Dave retired from CRA to be a full-time caregiver. Dave was a loving, devoted father, and spent countless hours volunteering at and for the children's schools. He was on the Parent Council of both Woodbine Elementary School and Emily Follansbee School, eventually becoming Chairperson / President of both councils.
David was an avid sports fan, cheering for the Winnipeg Blue Bombers, Toronto Blue Jays, and the Calgary Flames. When he was in high school and university, he was very active cycling, playing tennis (breaking his ankle) and football. He loved to play card games (which he usually won), was very interested in and frustrated by politics, was up on world events and had a head for all things number related. He had an appreciation for many types of music, which he shared with Noah. Kelowna was the favourite annual summer vacation spot, along with Salmon Arm, where Dave and Pam co-own a cheese factory with dear friends, Luigi and Susana.
Dave was very passionate about giving back to the community, particularly when it came to children with special / different needs. When Emma began attending therapy sessions at Families of Alberta for Conductive Education in 2010, Dave immediately joined that board as well, eventually becoming the Chair. Just prior to his passing, Dave had completed negotiating and signing the lease for a much larger space for the FACE program to accommodate both the expanding children's program as well as the newly established Adult Day Program. He and Pam set up a donor advised fund to help finance the Adult Day Program, which Emma now attends. This fund will continue to aid the program going forward and will serve as Dave's legacy - a testament to his love for his daughter, and his desire to help others.
Dave will be fondly remembered for his friendly nature, his quick wit, his love for his family, and his commitment and contributions to Families of Alberta for Conductive Education.
Besides his loving wife, Dave is survived by his son Noah (14), daughter Emma (18), and his sister Lori Francis (Ken Gembey) of Narol, MB. He was predeceased by his mother, Arlene, in 2019.
A celebration of Dave's life will be held at McInnis & Holloway (Fish Creek, 14441 Bannister Road SE, Calgary, AB) on Saturday, June 18, 2022, at 2:00 p.m. in the Hospitality Centre. Family and friends who are unable to attend in person are invited to join the service streamed live on the day of the service at www.McInnisandHolloway.com. For those who are unable to view live, a recording of the service will be posted. Condolences, memories, and photos may also be shared and viewed there.
In lieu of flowers, donations may be made to Families of Alberta for Conductive Education (FACE) at #1 - 6125 12 Street S.E., Calgary, AB T2H 2K1.
Pam wishes to thank the Foothills Hospital ER and ICU staff, especially Dr. Chip Doig, Dr. Lawrence Guttman, Dr. Andreas Kramer, Dr. Phillippe Couillard, and ICU nurses Jason, Sheri, and Meagan for their extraordinary care and compassion.