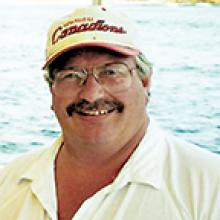 
Brian Turcotte, born Richard Brian Turcotte, aged 70, of Winnipeg Manitoba, passed away suddenly and unexpectedly at Grace Hospital on Thursday, May 5, 2022.
Brian was born October 12, 1951 in Winnipeg, Manitoba to Edmund and Katherine Turcotte (deceased), the youngest of five children.
As a youth, he cut a dashing figure and caught the eye of many a young lady, with his quick wit and abundant charm. His early photos show a handsome young man with a keen sense of style and plenty of swagger. He attended Elmwood High School, married early, and became the proud father of three devoted sons, Jason (Tricia) Turcotte, Clint (Angel) Turcotte and Edmond (Charlene) Turcotte. The sun rose and set with his boys. They were the joy of his life.
Brian is survived by his wife and partner of 30 years, Tracy Turcotte (nee Tochor).
In 1992, Brian struck pure gold when he met the woman of his dreams at the Golden Nugget Saloon. He swept that Saskatchewan girl right off her feet, with his arm-wrestling prowess, his mischievous grin and his silky-smooth dance moves. That man could really cut a rug and was especially fond of a slow spin to a sweetly sentimental country tune, his graceful gal snuggled tight in his arms. He married his beautiful bride in 1996, in an intimate ceremony at home. They enjoyed travel, gathering with friends, simple afternoons bathed in sunshine on their back deck. Their favourite winter destination, a home away from home... Friendly Vallarta in Puerto Vallarta, their very own version of Cheers, a place where everybody really did know their names.
He will be especially missed by his lounge family at the Green Brier Inn, the place Brian's own father took him for his 18" birthday. The Brier became a steady haunt, where he held court any given afternoon, a local larger-than-life version of 'Norm Peterson', minus the astronomical bar tab. A special thank-you for the lounge's tender tribute this week: the candle, the dreamcatcher and the open bottle of Bud, holding space... a breathtaking display of love and affection.
Brian's life was forever tied to the hockey scene, whether as a die-hard 'hockey dad', or a lifelong fan of his beloved Montreal Canadiens. Enduring friendships were made in hockey arenas across the province and beyond the borders, road trips aplenty, and countless cold Buds on tourney buses. He was fond of playing himself, participating in Rec Hockey with the West Kildonan Cougars in his younger days, but hung up his skates shortly after the infamous incident which garnered him his much-loved moniker. The rink boards were no match for a big man, a bit of speed, and a pair of razor sharp Spirol Corp-machined skate blades. And thus, the great 'Diesel' was born, a handle worn with abundant pride.
He loved golf, he loved his business, and he loved a great set of wheels. All three were inextricably tied to his affection and admiration for his older brother, Edmund Turcotte (deceased). Their shared love of exquisite cars fueled his lifelong quest for the perfect ride, culminating in the dream purchase of his coveted Jaguar XJL Portfolio. Ah, what a sweet, sweet ride.
He began his renovating career in partnership with his brother, creating their home building and renovation company, Turcotte Construction. Later, he became a founding partner in Dynasty Bathrooms, and ultimately went on to open his own Bath Fitter franchise. He was joined in the current business by his son Clint, his wife Tracy, his sons, Edmond and Jason, two daughters-in-law and one grandson, as well as dozens of others who became family-of-the-heart. It was his fondest wish to see the business continue to grow and thrive in the hands of the family he loved. Nothing meant more to him than to see his legacy live on for future generations. We hope we made him proud.
Brian was predeceased by his parents, his brother Edmund Turcotte, sister Diane Kennedy (nee Turcotte), his father-in-law Stanley Tochor, his brother-in-law Vern Zubko, his nieces, Shelly Turcotte and Lucille Kennedy, and his nephew Tommy Kennedy.
He is survived by his four cherished grandchildren, Mark (Arnie), Caitlin (Mark), Pandora and Ayden. His two eldest grandchildren are engaged to be married, and he would have been heartbroken to know he would miss their nuptials. In his own special way, he will be there still.
He is also survived by his eldest sister Shirley Zubko (nee Turcotte), mother-in-law Merle Tochor (nee Eyjolfson), sister-in-law Judy Turcotte, sister-in-law Leanne (Don) Muir, the mother of his children Diane (Peter) Charland, niece Lisa (Sylvain) Bellerive, nephews, Ted and Allen Kennedy, Gerald Bulera and Ethan Lustig.
A Celebration of Life will be held for Brian on Monday, May 16 at 1:00 p.m. at Cropo Funeral Chapel, 1442 Main St. A live virtual service will stream simultaneously, and will be available for viewing after. Private family interment to follow at a later date.
In lieu of flowers, donations may be made in Brian's memory to the Winnipeg Humane Society.