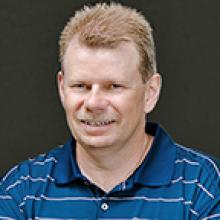 
It is with deep sadness we announce the sudden passing of our father and brother, Darren Bentley Kristjanson on April 18, 2022.
Darren was born on June 5, 1965, in Arborg and lived in Vidir, growing up on the Kristjanson family farm with his sisters and close cousins. Upon graduation from the Arborg Collegiate Institute, he attended the University of Manitoba, obtaining his Bachelor of Science in Agriculture.
From an early age, Darren was very goal-oriented. Deciding that he wanted a dirt bike, he worked at various jobs and saved for it. Next came a snowmobile and following that a car, when he was old enough to obtain his license. In his final year of high school, he decided he was going to excel. He applied himself accordingly and graduated with the highest academic honours.
Darren worked hard and took pride in his accomplishments. As a teenager he picked rocks, worked on a dairy farm and pumped gas at Harasym's Shell. During university summers he worked for the Bifrost weed district, the City of Winnipeg weed control and others. He enjoyed all the people he met along the way and appreciated running in to them in later years and having a good visit.
Upon graduation, his job search took him to Edmonton to work for Pickseed. In March of 1990 he left to join United Agri Products Canada as a Territory Sales Representative in Alberta. From there he took over the sales territory of Southern Saskatchewan. In 2001 he became the manager of a Retail Sales location in Saskatchewan and then moved to take the role of Prairie Sales Manager in 2006. Darren coached the western Canadian Sales team until 2017, when he left to pursue other interests. He rejoined the company in 2020, first in Edmonton, and then moving back to Manitoba in order to be closer to family. He most recently held the position of Manager, Agronomic Services where he developed strong training sessions for teams and customers across Canada. His strength in sales plus his vast knowledge of agricultural crops and products made him a very important member of the UAP Canada team.
Son Erik and daughter Hailee were born in Regina; the family moved back to Winnipeg in 2002. Darren loved his children and supported them in all the things they chose to do. Erik in hockey, lacrosse, football and curling; Hailee in dance and the performing arts. As a kid, Darren never had time at the lake, but he wanted his kids to have that opportunity. A cottage at Falcon Lake and boating became part of their family life.
Darren enjoyed life and the friends and family in it. He always tried to make the best of things and most people's earliest recollection of him was his ready smile. He loved sports, both playing and as a spectator. Hockey, curling, golf, and baseball were his favourites.
In Darren's last years of life, he displayed great courage in dealing with health struggles. Throughout it all he did his best and he so appreciated the support of those that cared about him.
Darren is survived by his children, Erik and Hailee. He will be missed by his sisters, Ingrid (Neil) Stevenson, Ardith (Barrie) Sigurdson, nephews, Steen (Monica), Brett (Kaylie) and close family, friends and work associates.
Darren was predeceased by his loving parents, Ingvar (2015) and Josephine (2021) Kristjanson.
A service is planned for Friday, May 27, 2022. Friends of Darren who would like to join us to honour his memory can contact Ingrid at ingrid.kristjanson@gmail.com for details.
In lieu of flowers, donations may be made to Siloam Mission, Bruce Oake Recovery Centre, Icelandic River Community Foundation - Vidir Cemetery Fund, Box 159, Arborg, MB R0C 0A0, or Geysir Cemetery Fund, Box 796, Arborg, MB R0C 0A0.