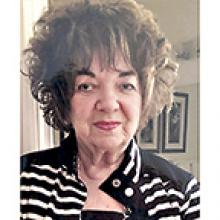 
With deepest sorrow, her family announces the peaceful passing of Beverly Carole Minkin, 84, adored mother, sister and friend, at the Simkin Centre on May 6, 2022.
Beverly is mourned by her beloved son Shane, sisters, Sharol Evans (David) of Regina, and Donna Jampolsky (Steve) of Vancouver; cousins, Brandy Graesser (Rob) of Edmonton and Sheldon Weidman (Fern) of Edmonton.
Bev will be sadly missed by her wide circle of friends, many of whom she has known since childhood.
She was predeceased by her parents, Sam and Sally Lipchen, her beloved husband Raymond and daughter Randa.
Beverly was born in Winnipeg on March 24, 1938 and grew up in the city's legendary North End, first on Jarvis before moving to Rupertsland in the early 1950s. She graduated from St. John's Tech.
Beverly met the love of her life, Raymond Minkin, in 1957. They were married on June 21, 1959 and spent 45 wonderful years together, raising their children in Garden City in the groovy 1960s.
Family meant the world to Bev and there was nothing she wouldn't do for them. She was everybody's "cool mom." She made everyone feel special. To know Bev was to love her and vice versa.
She was a people-person, a social butterfly who loved to entertain. Bev was old school: She could talk on the phone for hours but computers confounded her, although she became an expert in the strategy game Shanghai. In her later years, she had a passion for completing the daily crossword and was a big fan of Jeopardy and Blue Bloods (long story). She loved dining out, from the fanciest restaurants to greasy spoon diners and just about everything in between.
When she was younger, Beverly loved to travel, whether it was road trips with the kids to Disneyland, or New York City with Ray where she saw the original cast of Fiddler on the Roof on Broadway. The highlight of one Las Vegas trip was seeing Elvis in concert twice and managing to snag a handkerchief and a kiss from the King. In later years, she loved spending winters in Florida.
Beverly was known for her sense of humour, her impeccable style and her uncanny resemblance to Elizabeth Taylor. Once her kids were grown, she entered the retail fashion industry where she made many lifelong friends.
She beat cancer not once, not twice, but three times. However, the sudden loss of her soulmate, Raymond in 2004, and daughter, Randa in 2008, took a toll on Bev's sunny outlook.
She is survived by her pride and joy, Shane, who did his best to make sure his mom was taken care of in the regal manner to which she was accustomed. Heartfelt thanks to Patricia and Debbie for their unwavering friendship especially these last couple of difficult years.
Funeral was held Monday, May 9 at Shaarey Zedek Memorial Park, where Beverly was laid to rest beside her beloved Raymond.
In lieu of flowers, donations can be made to CancerCare Manitoba, the CNIB or the Simkin Centre. Make a donation to