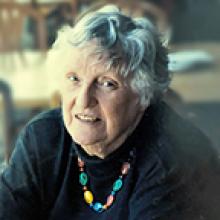 
Barbara passed away gently and peacefully at Golden Links Lodge, Winnipeg, on May 5, 2022. At 93 she had lived a long and very full life.
She was born in Peterborough, England on July 15, 1928. As a young girl during the Second World War, she was one of the Railway Children who were evacuated, along with her younger sister Margaret, to the Lake District of England to avoid the heavy bombings of British industrial cities.
As a young woman, she studied for Occupational Therapy in London and graduated with a degree. After receiving her degree, she began to travel and work around the world with the WHO (World Health Organization). Fairly uncommon for a young woman in the early 1950s.
Among the many places she lived and worked during the 1950s were India, Ceylon (now Sri Lanka) where she worked at a leper colony and throughout Africa ending up in Argentina in 1960. She and her son Martin emigrated from London, England to Winnipeg in February 1964.
Barbara developed the Occupational Therapy program at Children's Hospital and worked there for many years before moving on to become the Head of the Occupational Therapy Department at St. Boniface Hospital for many years, until her retirement.
Retirement didn't mean she stopped working though. For several years she travelled to many Northern Manitoba communities to do assessments of patients.
She was also very involved to the Winnipeg chapter of the Altrusa International service organization and among other duties, co-ordinated their involvement with the toy library program, Toys for Tots. She also often volunteered with the Winnipeg chapter of Habitat for Humanity.
In addition to all of her work-related accomplishments and service club duties she was well known and loved by a large group of friends and relatives who treasured her friendship and terrific sense of humour and love of fun. Barbara was really a great friend. She also had a very deep love of all things chocolate and she never met a dog she didn't love.
But not everything was loved, throughout her life she had a deep and abiding dislike of wearing hats. Even during the depths of Winnipeg winters. She also really hated getting her photo taken.
Her love of travel lasted well into her later years and she even took a long trip around China in her 80s. Barbara was also a long-time member of the congregation of All Saints Anglican Church.
Barbara is survived by her sister Margaret, of Alton, England; son Martin and granddaughter Charlotte, both of New York City.
The family sends special thanks to the amazing nurses and staff at Golden Links Lodge who took such great care of her for the last four years and to Barbara's wonderful caregiver, Cindy Lehmann.
Donations in Barbara's memory may be made to a charity very near to her heart, Doctors Without Borders/Médecins Sans Frontières.
No formal funeral service will be held.