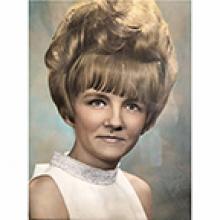 
It is with heavy hearts, we announce the passing of our dear mother and grandmother, Gloria Jean Wright.
On May 9, 2022, Gloria passed peacefully surrounded by family.
Gloria leaves behind her children, Kim, Angela and Darrin; grandchildren, Logan, Tylene, Jason and Terrence; ex-husband Terry and many cousins, nieces, extended family and friends. Gloria was predeceased by her mother Irene Lillian Covey (nee bland) and her father James William Purdy and her first grandchild Pierce.
Gloria worked at many places in her life from CJOB, Winnipeg Photo, Selkirk Interlake Physiotherapy and Statistics Canada as an enumerator, meeting many people in the community.
She was heavily involved in her children's lives with coaching girls East Selkirk Baseball and T-ball teams, as well as being the local Girl Guide and Brownies Leader and attending football games.
She loved bingo and would often bribe one or more of her children to attend with her, so there were extra hands for extra cards. Besides the love of her grandchildren, Gloria loved more than anything her cats and she was an advocate of catching feral cats and taking them in to be fixed, keeping and raising as many as she could. Her dream one day was to open a cat rescue and was one of her requests to be over seen by her family in her name.
She will be missed by many, but never forgotten.
No funeral or Celebration of Life has been set at this time, but will be announced at a later date.
In lieu of flowers, we ask that you make donations to your local cat rescue.