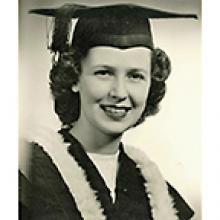 
Fern Watson (nee Little) was born in Winnipeg, Manitoba on November 16, 1926. She loved her big brother, her little dog and cat, and her friends. She was sociable and surrounded herself with friends and activities from an early age. She loved to dance, dancing on both ice skates and roller skates in her teens, Scottish country, square and ballroom dancing with her husband in her adulthood. She loved theatre and musical theatre, both acting and appreciating. She loved movies, and movie nights at the Classic and Kings Theatres in Winnipeg. She loved dressing up to go out.
Fern embraced work from an early age, starting at 15 at the Belgian Hosiery Shop. She worked for five summers at Great West Life. It was here she made friends with Margaret Wilson whose brother Bill became her husband.
Fern graduated from the University of Manitoba with degrees in English (1947) and Social Work (1949). She worked as a high school teacher in Selkirk, Manitoba at the age of 20. Her first social work job was in Adoptions with the Child Placement Branch of the Manitoba Department of Public Welfare. During this period, she was loaned out to the flood board to work with victims of Winnipeg's 1950 flood. After her first child, Fern worked as a fill-in Executive Director for the fledgling John Howard and Elizabeth Fry Society. This job profoundly influenced her world view and likely planted the seed for her eventual choice of the Society of Friends as her church.
When her children were young, Fern worked at St. Joseph's Day Nursery. Her supervisor, Sister Grace Garvie, remained a family friend forever. The Society for Crippled Children and Adults gave Fern some interesting experiences over the six months she worked for them. The Child Guidance Clinic, with the same hours and holidays as the school system, suited her family life so she worked there for four years. She loved taking her kids to the cottage in Victoria Beach for the summer. Fern finally spent 12 years as the Director of Social Work at the Grace Hospital, her favourite job and one that spanned her becoming single again and her children leaving home.
Fern married Roy Watson of Winnipeg in 1987 then took an around-the-world tour with him. They moved to Victoria in 1992 and lived in Brentwood Bay. Fern always loved playing games, especially cards, and played a lot of bridge in her retirement - several games per week. She also continued to love and support live theatre. She loved family dinners, talking on the phone and dining at a round table. She loved flowers and walking and Hawaii. She loved politics and current events and reading, mostly non-fiction. She loved saving money and she loved her friends.
Fern passed away quietly May 12, 2022. She was predeceased by her only sibling Glenn Little and her two husbands, Bill Wilson and Roy Watson. She will be sorely missed by her children, Laurie, Bill, Bob (Diana), and David (Loretta) Wilson, her grandchildren, Hayden, Richelle, Jacob, Samarie and Noah Wilson, and her seven nieces and nephews.
A Celebration of Life will be held on May 18, 2022 at 2:00 p.m. at Langtry Walk, 1872 Stelly's Cross Road in North Saanich. All are welcome. Livestream Link: https://tinyurl.com/42x49uda.
Donations in memory of Fern will be welcomed by the Children's Health Foundation of Vancouver Island.