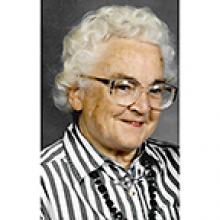 
On May 14, 2022, we lost our amazing, feisty and independent mother and grandmother, Gunvor Larsson. She passed away peacefully at The Saul and Claribel Simkin Centre in Winnipeg.
Gunvor was born in Ostersund, Province of Jamtland, Sweden on August 16, 1923 to Ester Giden and Otto Olsson. Her father died in 1927, and her young, widowed mother later married Axel Bostrom who became a father to Gunvor.
Gunvor was educated in Ostersund, Sweden and completed school at age 14; there were only 8 grades. Afterwards, she attended continuation school, followed by adult night school, to learn English, shorthand and typing. She worked as a secretary and bookkeeper for a company that sold office machines, and was required to travel across Sweden to demonstrate equipment and train clients on their operation.
Gunvor married Karl Larsson on April 5, 1947 in Jonkoping, Sweden where they raised their son, Bengt (Ben) Goran Gothe Larsson. In 1958, the family immigrated to Winnipeg, Canada.
In Winnipeg, Gunvor worked as a secretary/bookkeeper for Ogilvie Flour Mills, Carlson Painting and decorating, the Swedish Consul and Larsson Electric. She operated her own business, the Scandinavian Import Boutique, from 1974 to 1980.
Gunvor had a very active and fulfilling life. Her kindness to others and sense of humour made her a good teacher and friend. She and Karl enjoyed entertaining and spending time with friends of all ages. She is well-known in the Swedish community and beyond for her dedication to preserving Swedish culture and traditions. She will be remembered fondly by her many, many friends from St. Mark's, Vasa Lodge, Folklorama and the Scandinavian Cultural Centre. She will also be remembered by Winnipeg Jets Swedish players who Gunvor and Karl welcomed into their home.
She taught Swedish language classes for 40 years at Kelvin High School, St. John's High School, Vasa Lodge and from her home. In 1986, she organized a bus tour through Sweden, into Norway for 22 people, half of them being her students.
Gunvor was an active member of St. Mark's Lutheran Church since 1961 and served on the board for three years. She and Karl volunteered many hours to contribute to various programs and initiatives.
In 1963, she joined Vasa Lodge (Lodge Strindberg #259) and served as cultural leader for several years. She started a children's song and dance group and continued with it for 10 years. Some of the children performed their traditional dances at Folklorama.
Gunvor was one of the first executive members at the formation of the Swedish Pavilion at Folklorama. She and Karl founded the Scandinavian Folk Dancing Group in 1975 and performed at the Swedish Pavilion. Gunvor served as Mayor for the Swedish Pavilion in 1984.
The Swedish Press (Vancouver) is the only Swedish newspaper publication in Canada and for 18 years Gunvor contributed news and articles as its Manitoba representative.
Gunvor enjoyed preparing food and said that Swedish cooking was her hobby. She compiled the cookbook Gunvor's Temptations which was sold at her boutique. Gunvor showed CBC television viewers how to make pickled herring and her recipes were featured in the Winnipeg Tribune. Gunvor was also instrumental in publishing the 148-page cookbook Our Favourite Recipes (2007), with recipes by members of the Swedish Lodge Strindberg. Gunvor's Gems, her final cookbook in 2021 contains favourite recipes and sayings like "Coffee is always on."
Gunvor received many honours throughout her lifetime, including an award by the Swedish Consul of Canada for her years of service to the Swedish Canadian Community and, most recently, the Manitoba 150 Award. She was very proud of this recognition.
Gunvor is survived by her son Ben (Evelyn); grandsons, Matthew and Daniel (Crystal), and nieces and nephews in Sweden. Gunvor was predeceased by her parents and her loving husband of 66 years, Karl Larsson.
We are grateful for the compassionate care Gunvor received from her good friend Sonja Lundstrom, the WRHA Homecare staff, the physicians and nurses at Victoria Hospital and the caregivers at the Simkin Centre.
In keeping with Gunvor's wishes she will be cremated and placed beside her husband Karl during a private family interment service.