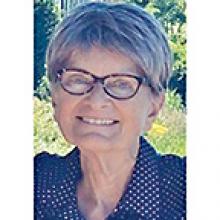 
After a long, well fought battle with cancer, Pat passed away peacefully at her home.
Pat always believed you can change the world and her life speaks to that vision.
Whether that was through working as the President of Tampa's National Organization for women, or writing a political column, "Focus on Women," or through working as a researcher for ABC's first investigative team. Pat was always an outspoken advocate for women's rights.
As an educator in Winnipeg she crafted the COLA (Community Oriented Learning Approach) and her grade six students earned the highest reading scores in the district in the 1970s.
Pat worked with exemplary teachers building the first community school in Winnipeg, William Whyte, giving inner city students stability and the community a beacon. Later she headed the Core Area Initiatives Program for revitalization and training of inner city residents.
She became a Director then a Dean at Malaspina College (now VIU in Nanaimo) and built the institution's international portfolio, setting aside funding for more domestic classes and many international opportunities for local students.
Later, she became an ADM and the first female Deputy Minister of Education in Manitoba.
And finally after retiring, Pat reflected on her own experience in girls high school and spent six years rebuilding Queen Margaret's School in Duncan. The Science & Technology building was named Rowantree Hall in her honour.
She will be missed deeply by her husband, Len her family, and all those who knew her. As an educator and an Innovator, she will be missed by everyone whose life she touched.


"She never blew her own horn but she led her own orchestra."


In lieu of flowers, donations can be made to a charity of your choice.