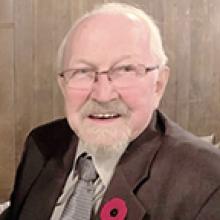 
It is with great sorrow that we announce the passing of our amazing father, husband, Papa, brother and friend, Bob, on Monday, April 25, 2022 at the Cape Coral Hope Hospice in Florida at the age of 78. This was one day before what would have been his mother Dulcie's 99th birthday.
Bob's best friend and partner in life of 43 years, Gail, predeceased him.
His second wife Jacquelyn Marie MacKay (Douglas) survives him.
Bob is also survived by his children, Shane (Janice), Mark (Sandra), and Cherie as well as his precious grandchildren, Neil (Alyssa), Jen (Ethan), Matt (Madison), Josh, Kayla, and Alexis. He is also survived by his great-grandchildren, Nolan, Mercedes, Jay, Leigha, Nevaeh, Ezamaye, and Peyton as well as by his only sister Audrey (Grant) Ball in Calgary.
His parents, Angus and Dulcie McKay as well as mother and father-in-law Maude and Arthur Patrick also predeceased Bob.
Bob had so many nieces and nephews, cousins, and friends, too many to mention but everyone had a special place in his heart including his adopted beloved Florida.
Bob was born in Glenboro, MB on February 24, 1944 and spent much of his younger days in the Glenboro / Wawanesa area where he met his soulmate Gail and together they formed a team like no other.
In his younger days Bob was a star athlete excelling in hockey and baseball. Bob was also a lifesaver having rescued multiple people from drowning in the Souris River.
Bob and Gail lived in Brandon, Edmonton and finally settling in Winnipeg.
Bob and Jackie lived in Missouri and Cape Coral, Florida.
Bob worked 40 plus years for Burns Meats, Pool Packers and Maple Leaf Foods.
He was a consummate host as well as very supportive and loved unconditionally. His home was everyone's home and was always filled with good people, good times and memories that will be cherished forever.
For our family we have lost the glue and someone that has fought a couple of courageous battles. Dad went quick as were his wishes.
Bob has been cremated and his ashes will be spread at Lover's Key beach in Florida as well as special places in rural Manitoba with his final resting place in Wawanesa with his beloved Gail where a small graveside family ceremony will be held.
The family would like to send their heartfelt thanks to the tremendous staff at the Cape Coral Hospital ICU unit as well as at the Hope Hospice Care Facility in Cape Coral, Florida.
In lieu of flowers, donations may be made in Bob's memory to the Heart and Stroke Foundation, 1379 Kenaston Blvd., Winnipeg, MB R3P 2T5.


So when at last we have to part
In sorrow and in pain
We know we are still joined in heart,
Until we meet again