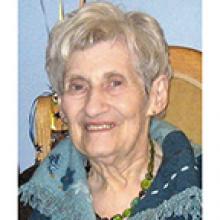 
Marion Laxer, beloved wife, mother, grandmother and great-grandmother, died gently in her sleep on Monday, May 9, 2022. She was 103 years old at the time of her passing and was predeceased by her husband, Benjamin Laxer, in 1989.
She is mourned not only by her immediate family, but by all of the children of her brothers and sisters as well her extended family.
Marion was born in Winnipeg on November 17, 1918, the fifth child of eight born to Aaron Levine and his wife, Clara (nee Hershberg). She graduated from St. John's High School and went to business school to become a bookkeeper. Very soon, she was promoted to credit manager. She had lifelong friendships with many work friends, especially with Laurine Beeston, and her late husband Larry. She had one group of friends, some from work, who called themselves the "Black Cats" and who originally came together to send care packages to soldiers during the Second World War. They remained good friends and continued to meet monthly for decades.
Marion Levine met Ben Laxer on a blind date (arranged by his Mother and her Aunt Rose) and the story of the first time they met enchanted their children every time it was told. They married on June 11, 1952. Their four children were born over the next six years and Marion became a stay-at-home Mom till all four were in school.
Marion's four children continue to believe that she was the best mother ever! Each of her children and grandchildren had a unique relationship with her and felt her tremendous love. She was fair, non-judgmental and an amazing role model for anyone lucky enough to be close to her. She put her children first and would make personal sacrifices so they could thrive. Nothing made her happier than when her husband and her children were happy.
Marion embraced the Jewish religion and kept a Jewish home. She was politically active and continued to exercise her right to vote throughout her life. She was a feminist long before the movement started and, as throughout her life, she proved that she was capable of anything she wanted to do.
She inspired each of her children to graduate from university, follow their passions, study a musical instrument, become a memorable cook, speak up, develop a sense of humour, value and love each other and extend her loving influence through two more generations of family. Being a Laxer has always been something special because Marion and Ben Laxer made it so.
She began keeping the books for her sister, Frima Wright's, business, The Glass House, at home. As her children grew, she began to work at the store full time and became a part owner, along with her sister, Lola Lavitt. The Glass House flourished for decades and when the store closed, Marion retired.
Marion's best friends were her brothers and sisters and family was the most important thing in her life. She always had a place at her table for family and friends and a listening ear when needed. Dinner at her table was always a welcome invitation and generations of family gathered in her home. All of the children of her brothers and sisters felt close to Marion, but so did the family elders, from the generation before her as well as all of her husband, Ben's, family.
Marion is survived, and will be forever loved, by her four children, Laurine Laxer (Philip Weickert), Claire Sumerlus (Ira Micay), Ian Laxer and Ron and Laurie Laxer as well as her grandchildren, Jordan Sumerlus (Christine Bryan Sumerlus), Jennifer Reineck (Chris Reineck) Brett Laxer, Caley Laxer and Benjamin Weickert and great-grandchildren, Charlie, Ruth and Margot Sumerlus and Mila Reineck.
A graveside ceremony was held on May 12, 2022, and Marion was buried beside her husband, Benjamin, at the Shaarey Zedek Cemetery in Winnipeg.
The family would like to extend heartfelt thanks to Remi Dvera, as well as Warlita Yu, for their love, companionship and care, and to everyone at the Simkin Centre for taking such good care of Marion over the years. The family also extends special thanks to Marion's doctors, Dr. Manishen and Dr. Pacin.