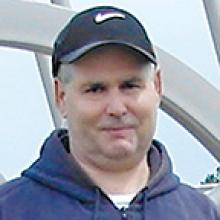 It is with sad hearts that we announce the sudden passing of John Hemmerling, Jr., on Sunday, April 10, 2022, at St. Boniface Hospital.
He will be deeply missed by his mother, Joan; brothers, James and George (Marcy); sisters, Joan (Alan), Liz, and Sandra; nieces and nephews, Pamela (Ernie), Deana (JJ), Steven, David, Danielle, and Melanie (Mackenzie); and great-nieces and nephew, Gwendolynne, Rowan, and Nala. He was predeceased by his father, John Hemmerling, Sr., his sister Caroline, and niece Julia.
John had a very creative mind when it came to constructing special projects for his mother. Anything she asked for in the house or the garden, John would gladly build for her.
John also loved to go fishing with his father and sister, Sandra. He always got so excited when he caught a fish because of the contest between the three of them. He was determined to win first catch, biggest fish, and most caught.
John enjoyed listening to an array of different music – 1960s and 1970s, rock and roll, classical, reggae. His favourites were Patsy Cline and Randy Travis.
He loved getting together with one of his very oldest and dearest friends, Gordie Howe, to watch movies. Whenever John would get the chance, he would gather family and friends to play a variety of games, indoors and out. Years ago, John reunited with one of his grade school friends, Martin Sing, who started a weekly game night with John and his brother Jim.
Cremation has taken place. A private family ceremony to inter John's and his father's ashes will take place in the coming months.