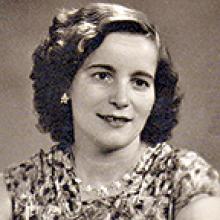 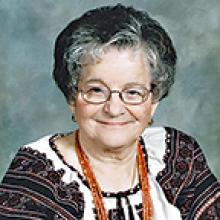 
Eugenia (née Hryckiw) Kandia, 94, passed into the Hands of the Heavenly Father on May 14, 2022, with family by her side.
Mom was born on September 30, 1927, in Chishky, in what used to be eastern Poland at the time, but is today, Western Ukraine. She was raised by her mother Olga Hryckiw, with the loving help of her grandparents, Ilko and Katerina Repa. Her father had left Ukraine to come to Canada to pave a way for his family. Alas, one thing after another kept Eugenia and her father apart – the great depression of the 1930s, then the Second World War in the 1940s and finally the cold war in the 1950s. But showing the kind of determination we would all one day come to admire, Eugenia and her father were reunited when she found a way to immigrate to Canada in late 1960. In 1961, she married Mykola Kandia and wasted no time in having her first child, Marian Lucas. Less than two years later, Eugenia gave birth to her daughter Olga Marie. They lived at 374 College for the next 10 years, when disaster struck and Mykola, her husband. passed away in May of 1973.
Growing up, Eugenia was her children's support system, instilling faith, the importance of family, hard work, education and kindness. Eugenia, while small in stature had a large and bold personality and was a true role model who her children always looked up to. She was a kind, giving and religious person. She always put the needs of others before her own. She was a strong person who faced every challenge in life with courage and dignity. Mother was a source of inspiration to us all and she will be deeply missed by everyone who she touched.
Eugenia was an active member of Sts Vladimir and Olga Cathedral where she was a member and two time past president of the Ukrainian Catholic Women's League. She held multiple positions in the parish members' council. She was a hard worker and volunteered for many causes. She truly believed that God was looking out for her and her small family. She sought to repay that kindness, by giving back to the church that gave her so much love.
She worked for over 20 years at Kalyna Ukrainian bookstore as manager and insurance agent. She was a member of Millenium and Dumka choirs and supporter of Plast Ukrainian Youth association. Mom was proud of her Ukrainian heritage and instilled that pride in her family. She lived 10 years in Selo Vila on McGregor, when her health was failing but her desire to be close to her church, was paramount. There she lived with a number of her closest friends as they all aged and prayed the rosary together.
The last couple of years mom lived at Holy Family Personal Care Home. Thank you to the staff of 2A Sacred Heart for all the wonderful care and compassion. Heartfelt thank you to mom's longtime physician (she always claimed she was his first patient), Dr. Terry Babick and Dr. Andrea Babick for their empathy, tireless care and support. Thank you to the staff of ER and 5B at St. Boniface hospital for your care and empathy in her last days.
Mom is survived by her children Lucas (Lydia), and Olga (Jerry Baluta); grandchildren, Mykola, Zachary, Riane and Orion and and through marriage, grandchildren, Stefan, Andrew and Raisa. She is also survived by numerous relatives in Canada and Ukraine.
Funeral service will be held at the Metropolitan Ukrainian Catholic Cathedral of Sts Vladimir and Olga, 115 McGregor St. on Wednesday, May 25, 2022, at 10:00 a.m., with Rev Ihor Shved officiating. A light lunch will follow at the Cathedral Hall, ending with interment at All Saints Cemetery.
In lieu of flowers, please consider a memorial donation to the Kitchen Renovation Fund at Sts. Vladimir and Olga Cathedral, Plast Ukrainian Youth Association, the Shevchenko Foundation- Eugenia Kandia Scholarship Fund, or the Orphan War Relief in Ukraine c/o Ukrainian Catholic Mission.