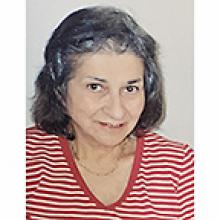 
The family of Joan Cohen sadly announces her passing on May 17, 2022. She was born to Sylvia and Joseph Cohen on August 27, 1933, in Winnipeg.
Joan was gifted with the journalist gene. Beginning in Grade six at Sir John Franklin School, she wrote, 'edited' and illustrated her class newspaper. She never stopped writing.
At university in the early 1950s she co-edited The Manitoban. Interestingly, she also joined a group of local thespians (including the late John Hirsch) in helping to found the Winnipeg Little Theatre, now The Royal Manitoba Theatre Centre, the first professional theatre company in Canada.
After graduation, she travelled to Europe, falling in love with Italy, where she spent 18 months. Through an arrangement with the Winnipeg Free Press, she sent them articles, detailing her impressions of post-war Rome. Her personal letters were a delight, describing her own new activities and replete with her exquisite sketches in the margins.
Upon her eventual return home, her true journalistic career began. It started in Montreal, with a position at The Family Herald. Montreal in the early 1960s was the place to be, and Joan loved it, but her career soon took her to Ottawa, where she became a parliamentary reporter for Southam News. She also found time, somehow, to study Economics at Carleton University at the same time. This was an interesting period in Canada. It was in this era, for instance, when Canada finally got its own flag. Joan's tenure in Ottawa encompassed the eras of L.B. Pearson, Brian Mulroney and Pierre Trudeau. Joan's last assignment in Ottawa was in the position of Ottawa editor and parliamentary correspondent for The Winnipeg Free Press.
Then, after nearly 40 years (with intermittent visits), she finally came home to us.
Joan continued to write for, and edit, local magazines and periodicals, but now also found time to listen to her favourite symphonies, and to engage in her favourite pastime: gardening.
Joan was an introvert, and thoroughly committed to the tasks she loved. She was generous. And oh, how she loved her cats! We miss her already.
Joan is survived by her sister Carolyn Mitchell (Nathan); nephew Jeff Mitchell (Barbara Grace): niece Alison Mitchell (Gary Israel) and the youngest generation: Ken Prue (Renée Girard), Mike Prue (Elyse Prue), Sophie and Sasha Israel and several cousins. She is also survived by her step-nieces, Sheryl Kapitz (Aaron) and Francine Kapitz-Margolese (Alan) and, of course, her beloved cats, Mikey and Tovey.
The family wishes to thank the staff at Emergency and especially on Ward 3 North at the Grace General Hospital. Their caring and professionalism are deeply appreciated.
Those wishing to honour Joan may consider a donation to the Winnipeg Humane Society, Rescue Siamese and Stray Cats, or a charity of their choice.
Cremation has taken place. There will be gathering of friends and family at a later date.