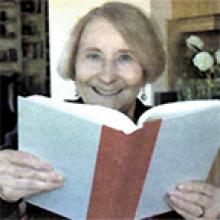 
After a life well-lived, Beverley, on May 17, 2022, the daughter of the late George Percival and Phyllis Jefferson Graham, passed away at the age of 88 years.
Beverley, wife of her late husband, Berny, is mourned by her three sons, Jeff of Calgary, Graham (Mary), and Robert (Sandra), and her four granddaughters, Christine (Stephen Pratt), Paige (Andrew Rawson), Hailey, Hannah, a great-granddaughter Quinn Rawson, and a brother Robert Graham (Margaret) of Yorkton, Saskatchewan.
She is lovingly remembered by her sisters-in-law, Mary Gerus of Calgary and Donna Ferris of Winnipeg.
Beverley was first of all a teacher. After grade 12 she graduated from the Provincial Normal School in 1951 and, with a love for adventure, taught Grade One at Bisset, Manitoba, home of the San Antonio Gold Mines, then an isolated community. There she met Berny Zakaluk, the junior high teacher, whom she married in 1955.
As well as a being a homemaker, Beverley was a lifelong learner. While being a wife and mother, she obtained her baccalaureate in both arts and education, her master's in education, those at the University of Manitoba, and her doctorate from the University of Minnesota. As well as being a school teacher at Woodhaven Elementary School, Beverley was a Reading Clinician at the Child Guidance Clinic, headquartered in the Winnipeg School Division. Later she became a professor in the Faculty of Education at the University of Manitoba, serving for 25 years. She specialized in teaching and learning, and taught courses at all levels, certification year students, post baccalaureate, masters, and doctoral students, serving as both an advisor and mentor to many.
Beverley was a doer, and a non-stop worker. Her colleagues called her the nonstop 'Energizer Bunny'. She received a number of awards, including the Lieutenant-Governor's Medal for Literacy, the YMCA-YWCA 2002 Women of Distinction Award for Education, Training and Development, the Dr. and Mrs. H. H. Saunderson Award - for excellence in teaching and later the award for excellence in graduate teaching, the Canada's Literacy Volunteer of the Year Award, the International Reading Association Celebrate Literacy Award, the UMFA, Faculty of Education Merit Award, a certificate of merit from the Reading Council of Greater Winnipeg, as well as the University of Manitoba Outreach Award. She was honoured as a lifetime member of both the Reading Council of Greater Winnipeg and the Reading Clinicians of Greater Winnipeg. Published works included "Readability, It's Past, Present, and Future", and "Family Literacy Programs: the Bookmates Experience". When she retired, Beverley was honoured by being designated as professor emerita.
Throughout her professional career, Beverley believed in the value of involving parents and the community towards fostering literacy, being especially concerned about the role of family in supporting the early literacy skill of preschoolers, most importantly their ability to express themselves through storybook reading. In 1984, she helped found Bookmates Inc., a not-for-profit organization whose mission is to inspire families and communities to grow together through the joy of learning. Beverley, with the support of the Reading Council of Greater Winnipeg, launched I Love to Read Day at City Hall on Valentine's Day in 1982. The success of I Love to Read Day is now celebrated every year, over the whole month of February, as I love to Read Month, all these years later.
After cremation, a funeral service will be held at St George's Anglican Church, Cresentwood on Friday, May 27, 2022 at 11:00 a.m. Private interment will be at Thompson "In The Park" Cemetery at a later time.
No flowers, please. If friends so desire, contributions to Bookmates, 623 Erin Street, Winnipeg, MB R3G 2W1 in memory of Beverley would be very much appreciated.


But now abideth these three:
faith, hope and love.
But the greatest of these is love,
Corinthians 13:13
THOMSON "IN THE PARK"
204-925-1120
Condolences may be sent to
www.thomsoninthepark.com