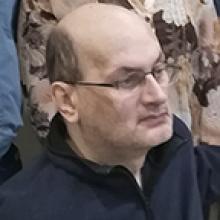 
It is with heavy hearts that we announce the passing of Ernie (Ernest) Wyryha, at the age of 59.
Ernie is survived by his wife Donna (nee Solylo) and his children, Matthew, Sarah and Adam; his mother Meroslava Gerber (Peter); sister Darlene; brothers, Ronald (Liette) and Taras (Larisa). He was predeceased by his father Paul (Phyllis) in 2001. Ernie is survived as well by nieces, Andréa (Perminder), Jeanne (Tyler), Tonya and Zenya and nephews, Nick (Kristen) and David.
Ernie was born in Winnipeg and went to school at Hastings School and Dakota Collegiate. He was very good in sports, such as broomball, soccer and basketball and received numerous trophies. Ernie continued his love of sports throughout his life.
After high school, Ernie went to Red River Community College and received his Certificate in cabinet making. He was very good working with wood, as he and his cousin Josie finished a beautiful wooden stool together and later Ernie crafted a bedroom shelving unit for home.
Ernie met his wife Donna thanks to his brother Taras and a small get-together of Ukrainian Catholic young adults. Ernie and Donna eventually helped each other organize and run several volleyball, baseball and bowling games for the group, as well as make pancakes at church breakfasts and chili at a hayride/game's night. Ernie was given the Member of the Year Award due to his joie de vivre, teamwork and willingness to take on almost anything.
Ernie and Donna were married in 1989 and welcomed their family of three starting with Matthew, then Sarah and Adam. When Sarah was only three months old, Ernie and Donna took their young children from Winnipeg to go and live in Pinawa, where Donna was teaching. Ernie was able to get on as a cabinet maker in Whitemouth and worked there for 16 years. In Pinawa, Ernie enjoyed playing badminton and later watching his children play sports of their own, such as his sons' little league softball games, as well as his daughter's volleyball games in high school.
Ernie visited family in Winnipeg every Saturday and enjoyed playing cards on many of his visits to Sarto, Lorette and Surrey, BC. Ernie and his family went on trips to Elkhorn playing golf, to Whistler, to Disney World and to Mount Tremblant, where they played mini golf. Sport was a thread throughout his life to be sure, as Ernie and Donna enjoyed some of their last moments together watching a Toronto Blue Jays win.
A private family viewing is to be held on Sunday, May 22 and a private grave side ceremony is scheduled for Thursday, May 26, both at Glen Eden.


Rest in peace Ernie. Vichnaya Pam'yat!
Family and friends may sign
a Book of Condolence at www.glenedenmemorial.ca