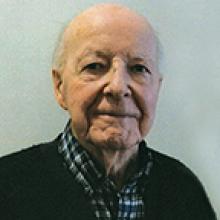 
It is with sad hearts and a lifetime of wonderful memories that we share the news of Bob Siddall's passing on Monday, May 16, 2022.
Born in Winnipeg, of Eldon and Lillian Siddall (Brown) on January 18, 1927.
He leaves to mourn his sons, Rob (Lorette Cenerini), Jon (Lisa) and Kevin (Kim), all of Winnipeg, his son-in-law Hank MacComb of Kelowna, BC, his daughter-in-law Evelyn of Winnipeg, 12 grandchildren and seven great-grandchildren, and a goodly number of nieces and nephews. In addition to his parents, he was predeceased by his wife Eleanor, his son Peter, his daughter Linda MacComb, his sister Margaret Harman, and his brothers, Ted and Bill.
Bob was raised and educated in Winnipeg. He attended Laura Secord and Gordon Bell schools, and graduated from the University of Manitoba in 1948 with the degree Bachelor of Commerce (Hon). In 1986, the University of Winnipeg conferred upon him the honourary Degree Bachelor of Law.
Following university, he was employed in Winnipeg until 1951 when he and Eleanor moved to Montreal where Linda and Rob were born. In 1954 they returned to Winnipeg where he joined The Great-West Life Assurance Company, from which he retired in 1989 as Senior Vice-President and Secretary.
Bob met Eleanor in 1947 and they were married in 1950. They had a long and happy life together, sharing many joint interests and activities, and many years of wonderful companionship. He took great pride and found much joy and satisfaction in his family. He took great interest in the lives and the accomplishments of his children and grandchildren and of the other members of the family, and the time that they spent together was precious to all. Times together were always marked by laughter, love and respect. Bob especially enjoyed spending time at the family cottages on Lake Winnipeg and in later years in northwestern Ontario.
He made friends easily and had many of them. This led to an active participation in community affairs where his interests lay in government, business, health, education and the environment. His motivation was to assist where he could in strengthening these important institutions of our society. His passion led him to serve on many community boards and organizations including the University of Winnipeg (where he served on the Board of Regents for 17 years, including three as Chair), the Victoria General Hospital, the St. Boniface Hospital Research Foundation, CancerCare (Manitoba) and Fort Whyte to name a few.
Bob enjoyed athletics, as a participant and then in his later years as a viewer. As a youth he participated in baseball, basketball and track. In the following years, he turned to squash, curling and golf "with middling success but always with great enthusiasm" (his words, not ours). Bob was an avid reader and a lifelong learner, enjoying discussions about politics, current affairs and the world around him. He was always interested in the thoughts and opinions of others.
Bob was a man of great character and integrity, full of kindness, grace, compassion and humour. He led a full and productive life and remained grateful throughout for the many blessings which had been bestowed upon him, and for the awe, wonder and contentment that he found in his natural surroundings. He will be sorely missed.
A funeral service will be held on Thursday, May 26, 2022 at 11:00 a.m. at St. Andrews River Heights United Church, 255 Oak Street at Kingsway (please note that masks must be worn for the service).