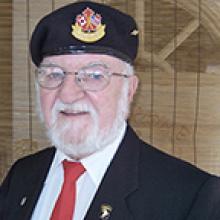 
It is with profound sadness and heavy hearts that we announce the passing of Ronald Allan Parkes on May 17, 2022 at the age of 79 years.
Ron was born on January 8, 1943, eldest of seven. He grew up and attended school in East Kildonan. From 1960 to 1962, Ron served in the Canadian Forces Reserves, Fort Garry Horse, 10th Armour Regiment. He enlisted in the US Army in 1962 and served in Fort Campbell, Kentucky where he trained as a paratrooper with the 101st Airborne Division. In the summer of 1965, he volunteered for a tour of duty in Vietnam, serving in the 1st Brigade, 101st Airborne Division Screaming Eagles on a 105mm howitzer gun crew, B-Battery, 2nd of the 320th Artillery. Ron was honourably discharged and resumed his civilian career. He worked as a longshoreman in northern BC, and an iron worker throughout Western Canada, before his 20-year career as a Correctional Officer for the Province of Manitoba. After retirement, Ron was diagnosed with Parkinson's, but that didn't stop him from getting a part time job as a security officer at the Centennial Concert Hall, which he enjoyed for many years.
Ron was a motorcycle enthusiast and in his continuing quest for adventure was a member of the Spartans Motorcycle Club in its formative years. Ron and Connie enjoyed many years touring Canada and the US with the group. In 1974 Ron was involved in a serious motorcycle accident, and his riding days were over.
Ron co-founded and was the current President of the Canadian Vietnam Veterans Association, successfully advocating for benefits for Canadian Vietnam Veterans. Ron was also a proud member of the Prince Edward Legion Branch #81, and a member of the VVA (Vietnam Veterans Association) North Dakota Chapter #374.
In 1993, Ron and Connie purchased a home in Lancaster, MN where they and their family spent many happy summers, and were actively involved in the community. Especially memorable was the annual Labor Day Weekend gathering of Canadian and American Vietnam veterans and their families that Ron and Connie hosted in Lancaster.
Ron is survived by his loving wife, Connie; and children, Greg, Jeff (Janice), Penney and Kelly; grandchildren, Jordan, Joshua (Angie), Jessica, Joel, Kodey, Tyler and Sara; great-grandchildren, Parker, Willow, Clover, Gavin and Taryn; his siblings, Wes (Pat), Bill (Suzie), Mary Lynne (Tom), Brian (Bonnie), Sandra (Darrell); sister-in-law, Kathy, and numerous nieces and nephews. Ron was predeceased by his father Clifford, mother Iris, brother Barry, brother-in-law Tom, and son-in-law Grant.
A celebration of Ron's life will be held on Thursday, May 26 at 1:00 p.m. at Klassen Funeral Home, 1897 Henderson Highway.
In lieu of flowers, donations may be made to the Canadian Vietnam Veterans Association, c/o Rob Purvis, 813 Nottingham Ave., Winnipeg, MB R2K 2C9.


KLASSEN FUNERAL HOME
204-338-0331
Condolences may be sent to
www.klassenfuneralhome.com