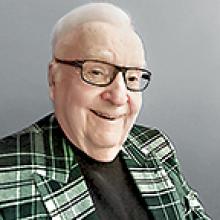 
Peacefully on Tuesday, May 17 at the St. Boniface Hospital, Bruce Campbell passed away after a short illness.
Bruce is survived by Lesley, his wife of 59 years; their children, Nancy Gay Campbell (Douglas Laxdal) and Brock Duncan Campbell (Jennifer) and grandchildren, Ford Laxdal, Kai Laxdal, Reid Laxdal, Clayton Campbell, and Reese Campbell. Bruce is also survived by siblings, Calvin, twin brother Byron, Ross, James and Carolyn and their families.
Bruce was born to Duncan and Kathleen Campbell and grew up on the family farm at Chater, Manitoba. He attended Clinton School, Brandon Collegiate and graduated from the University of Manitoba Faculty of Agriculture in 1958 with a major in Animal Science. Post-graduation he joined Feed Rite Mills as a sales representative.
Seeing an opportunity, Bruce purchased an interest in a rural feed business in Landmark, Manitoba in 1968, becoming sole owner nine years later. For the next 30 years he led a team of partners and outstanding employees and turned Landmark Feeds Inc. into one of Western Canada's leading agribusiness companies known for its innovation, people-first culture and support for rural communities culminating with the company being sold to Maple Leaf Foods in 1999. Bruce established his reputation as a businessperson with vision and integrity but his true gift was his ability to forge relationships with people; his staff, customers and community.
Bruce made numerous significant contributions to the development of the agricultural industry in Western Canada. His many accolades include the Canadian Feed Industry Association Golden Award (1995); 1999 Manitoba Entrepreneur of the Year (Agriculture/Food); 1999 Prairies Region Entrepreneur of the Year; and the Manitoba Institute of Agrologists Distinguished Award in 2002. He was inducted into the Manitoba Agricultural Hall of Fame in 2004 and received the Outstanding Philanthropist Award by the Association of Fundraising Professionals in 2006. In 2007 Bruce was awarded an Honorary Doctorate of Laws from the University of Manitoba acknowledging his strong support of the industry. Bruce was named a Fellow of the Agricultural Institute of Canada, 2011; and inducted into the Manitoba Business Hall of Fame, 2016 for his entrepreneurship in agribusiness and his generous support of innovation and education in Canada's agriculture industry.
Bruce was honoured when he was awarded the Order of Canada in 2015. He played an important role in shaping Western Canada's agri-food industry. Bruce confirmed his interest in youth and agriculture when he and Lesley created the Bruce D. Campbell Bursary Fund at the University of Manitoba Faculty of Agriculture supporting many students to study agriculture. His support of educational causes is notably seen at the University of Manitoba Bruce D. Campbell Farm and Food Discovery Centre that serves to enhance our understanding of how food is made.
Bruce was proud of his association with Ducks Unlimited Canada, serving on the Board of Directors at the time of the development of the Headquarters and Interpretative Centre at Oak Hammock Marsh.
The high value he placed on people and their interests resulted in a wonderful network of friends and family that he and Lesley enjoyed throughout their life. They had many friends from winters spent in Palm Desert, CA, and St. Charles Golf Club. An avid outdoorsman, Bruce enjoyed the camaraderie of fishing and hunting with friends and family at locales that held a special place in his heart: Sparrowhawk Lake in Northern Manitoba, Lake of Woods, the Ponderosa and Tilston House. Whether in a boat or a blind or hashing out the day's activities around the fire Bruce was in his element. The end of the hunting season was celebrated at the Annual Game Dinner where stories were exaggerated between friends. He was very proud of his family. He adored his supportive and loving wife Lesley; his children, grandchildren, nieces and nephews and their families and savoured time with them all whether on a special Disney Cruise, Victoria Beach or Brandon reunions.
Bruce Campbell led an admirable life. He was generous, compassionate and principled. He had an incredible ability to connect with people. He loved his family, home, nature, and Manitoba.
In lieu of flowers, please consider a contribution to the Canadian Cancer Society, the Siloam Mission or a charity of their choice.
A funeral service will be held at 2:00 p.m. on Wednesday, May 25, 2022 at Chapel Lawn Funeral Home, 4000 Portage Avenue.