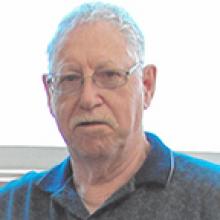 
Lorne Henry Tubman passed away peacefully on May 18, 2022, after a long battle with dementia.
He leaves to mourn his three daughters, Ramona, Tammy and Tanya, his grandchildren, Ellx, Jared, Zariah, Zander and Zayden, his brothers, Cliff, Neil, Ben, their families as well as numerous friends and relatives.
He was predeceased by his brother Darrell in 2011, daughter Pamela in 2019 and his wife Rena in 2003, who he missed very much.
Dad was born on July 31, 1944 and grew up in Shawville, Quebec. As a young man he travelled and worked various jobs across Canada and the US. While in Winnipeg he met a beautiful young lady from Norway House named Rena and ended up marrying her and having four daughters. They lived in Norway House and Sudbury for a while before eventually settling in Winnipeg.
Dad had a few different jobs before working almost 20 years at Livingston Distributors in the warehouse and as a truck driver. Dad was a hard worker who always made sure his family's needs were met. He loved a finding good deal and was always scoping out the best price.
After losing Mom, he busied himself with travel and went on tours in Europe, Israel, Egypt and Jordan, he also visited his daughter Ramona and her family when she lived in various places in the US and in India.
Anyone who met my dad knew he loved to chat, he would tell stories and show photos of his travels to his friends, family, neighbours, store clerks and anyone who would listen.
In 2017 he was diagnosed with dementia, by 2019 he needed to be in care. Over time, due to his illness he sadly lost his ability to speak. In the last few years before this happened he would talk about my mom a lot. He really missed her.
We love you and will miss you Dad, but know you are with Mom now.
Special thanks to staff at the Deer Lodge Centre and to the Alzheimer Society of Manitoba.
Funeral service will be held on Thursday, May 26, 2022 at 11:00 a.m. at Korban Funeral Chapel.
If friends so desire, in lieu of flowers, donations may be made to the Alzheimer Society of Manitoba.