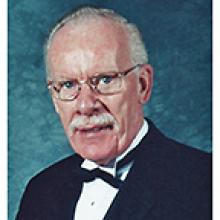 
It is with profound sadness and a lifetime of wonderful memories that we announce the loss of Gary James Chatfield.
Born in Winnipeg, Manitoba, the only child of Stanford and Mary Chatfield, devoted and loving husband of 65 years to Arlene; proud father to Kyle, Troy, Mark and Brant; father-in-law to Barbara, Eva and Joan (predeceased); grandfather to Kara, Ryan, Evan, Colin, Amber, Kaitlin, James and William.
Gary earned his B.Sc. in Pharmacy at the University of Manitoba, followed by a degree in Hospital Administration from the University of Toronto. After his graduation from the U of T, Gary embarked on an illustrious career that began in Richmond Hill, Ontario as the Administrator of the newly constructed York Central Hospital. That was followed by public sector positions, starting with the Ontario Government as the Assistant Deputy Minister of Health. The family spent five years in Alberta when Gary became the Deputy Minister of Hospitals with the Alberta Government. Gary and the family returned to Ontario in the early 1980s and have been long term residents of Mississauga (Port Credit) ever since. Gary ended his career as the President of Canadian Health Care for Extendicare. Gary served on many government-appointed committees and was a past board member of Sunnybrook Hospital, West Park Hospital, Trillium Hospital, Canadian Blood Services and Sheridan College.
Following his retirement in 1995, Gary and Arlene travelled extensively, enjoyed spending time with their four sons and their families and attending all of the activities of their eight grandchildren, all of whom live nearby. Gary was a man of honour and integrity in everything he did and will be fondly remembered by all those who knew him. Gary had many health challenges later in life, but never complained and always seemed to take his struggles in stride and with a smile. He never gave up and embodied his strong Scottish heritage. Gary was a remarkable and talented man, and after a full and rewarding 87 years of life, left us with Arlene by his side and is now at peace.
Gary will be dearly missed but never forgotten by his family and friends. In respecting Gary's wishes, cremation and a private family service have been arranged.
Donations would be appreciated to the Canadian Cancer Society or Trillium Health Services.


Online condolences can be forwarded to: garychatfield278 @gmail.com