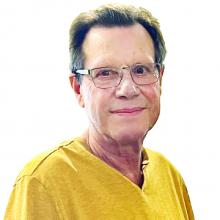 
It is with profound sadness that we must announce the passing of Allan Mehmel (Big Al) on May 22, 2022 at 68 years of age.
Allan (Al) will be lovingly remembered by his wife Kerstin and his children, Tarra (Mike) and Jessica (Jeff). He will also be forever remembered by his grandchildren, Peyton, Jersey and Jagger, as well as his siblings, Linda, Connie (Mark), Richard (Donna), Corinne (Dorlan) and Angela (Robert) and many nieces, nephews, cousins and friends. He now joins his parents, Rudolph and Adelina, his siblings and best friends, Ron and Carol, may they all rest in peace.
Allan was born the youngest of three brothers. His youth was spent roughhousing, snow fort building, playing shinny and taking turns playing Zorro. Al's love of camping grew from summers spent at the beach with his family swimming and sharing meals. They were such a loving, close knit family and still are.
Allan and his family lived in several small towns until they settled on Woodbine Avenue in Winnipeg where he developed lifelong friendships in the neighbourhood. This led to his passion for sports. It started with hockey, wrestling and baseball then turned to golf, fishing, NASCAR, Formula 1 and Soccer. Go Dortmund!
Enjoying life and being active was a huge part of raising his two daughters. He coached their baseball teams, took them skating, cross country skiing, taught them how to jump off Opapiskaw rock and played basketball with them in the evenings. Playing outside with Tarra and Jessica is where he fostered their love for the outdoors. He was always supportive even when teasing them daily.
He had such a good sense of humour. He was always down to have "Shnuggles" (drinks) on the deck and a big cigar. He loved gatherings and hosting BBQ's. Allan was a huge fan of "pop ins." Anyone could show up at any time and he was welcoming. "You know where the bar is", he'd say.
His deck was where he loved to be. There was never a political issue Allan didn't have an opinion on. Many of the country's problems were debated and solved on that deck. Bring an open heart and a good sense of humour. It was also from the deck where he watched all three grandchildren play and grow. He loved them so dearly.
On June 15, 2001, Allan met his sweetie. They built a life together and a sign business that they were both very passionate about. They shared a love of music and had many great times at concerts. They did a lot of travelling together and were inseparable. They were married in 2012 and spent most of their time enjoying the river view together from their deck.
Not only was Allan kind, generous and loving. He had such a warm and welcoming way about him. He taught us all to be better. His laughter and unique way about him will forever be etched in our hearts. We love you so much.
Kerstin, Tarra and Jessica
We would like to give special thanks to his sisters for all they've done in the past year. Your brother had so much support and many smiles because of you all. We would also like to thank everyone whose lives Allan has touched. We very much appreciate your kind words and thoughts.
A celebration of Allan's life will take place on July 16. Please contact Jessica at jerseyandjagger@gmail.com for more details.