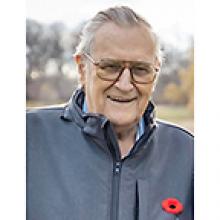 
On Sunday, May 22, 2022, we said 'goodnight' to an amazing human being, a man of faith, family and community. Ronald Bruce Keller was born in Winnipeg on October 14, 1936 to two loving parents, Katherine (nee Hiebert) and Jack Keller.
Ron spent his youth growing up in the west end of Winnipeg. He attended Somerset School, Hugh John McDonald and Daniel McIntyre. Though his family faced many challenges, Ron would later describe his childhood as being 'a rich one.' He was very close to his mother and described his father as 'always there' for him, telling him to "work hard and be honest."
Ron's first full time job was with the Winnipeg Free Press as a copy boy in July 1952. He continued working for the Free Press for nine years as a Fairchild Engraver operator and taking pictures for the paper. It was during this time that Ron met Patricia, thanks to the matchmaking skills of the 'Jumble' puzzle ladies. They were married on September 9, 1961 and celebrated their 60th Anniversary in 2021.
Ron joined the Royal Canadian Army Service Corps Reserves in 1955. He spent ten years with the 6th Column Royal Canadian Army Service Corps (M) before transferring to the Fort Garry Horse, and finally with the Queen's Own Cameron Highlanders 407 Cadet Unit as a Cadet Instructor. He proudly served, attaining the rank of Staff Sergeant. In 1981, Ron was awarded the Canadian Decoration (C.D.) for over twelve years of service, an earthly achievement that he was very proud to receive.
In 1979, Ron and Pat welcomed their 'special Valentine' Cheryl Patricia. Cheryl shared a close and very special relationship with her Dad. In 2012, Cheryl married Pattrick Beal, a son-in-law who was much loved by Ron. In 2014, one of Ron's greatest blessings was the arrival of his beloved grandson Isaak. Isaak was his treasure.
Over the years, Ron held a variety of jobs in the printing/automotive fields and government service with Fleet Vehicles and Apprenticeship. He was with the Provincial Government for 25 years and retired in May 2002.
Having lived in the Weston area since 1962, Ron became highly involved in advocating for the community and was unofficially known by many as 'the Mayor of Weston'. He firmly believed that his calling was to assist people having difficulties dealing with bureaucracy and tried to provide services not readily available to them. He worked tirelessly to this end with the following community groups, Weston Community Residents Assn., Weston Resident Housing Co-op (founding member), NorWest Co-op Community Health Board, Westlands Non-Profit Housing Co-op, Blake Gardens Residents Co-op (founding member).
Having accepted Christ at a young age, Ron's Christian faith was central to who he was and all that he believed. He attended Grant Memorial Baptist Church for a number of years and was baptized there in the 1950s. Even in times when Ron later drifted away from the church, he never abandoned his faith. In the early 2000s Ron began attending Weston Gospel Church, later renamed Cross Church. His relationships with Pastor Alan and so many others over the years were a great blessing to him.
Left to celebrate Ron's life are his wife Patricia (nee Knight); daughter Cheryl Beal; son-in-law Pattrick; grandson Isaak; brothers-in law, Don Knight, Grant (Kim) Knight; sisters-in-law, Marlene Rieger, Carol Wazny, Connie Knight; his nieces and their families; his Cross Church family and many other extended family members and friends.
Ron was predeceased by his parents, Jack and Katherine; brothers-in-law, Terry Rieger, David Knight; sisters-in-law, Andrea Knight, Linda Knight.
Pat and Cheryl wish to extend special thanks to Denise Baker, Pastor Alan and Gloria Duncalfe, Pastor Chris Zielke, Pastor Barry Maurer, Dr. M. Pelletier and the staff at HSC where Ron was well cared for.
A private burial service will take place, followed by a public Memorial Service on Monday, June 6, 2022 at 1:00 p.m. at Cross Church, 1787 Logan Avenue, Winnipeg.
In lieu of flowers, donations can be made to Cross Church.


"I do not have to worry about tomorrow because I know who holds tomorrow.
Christ holding my hand all the way!"
- Ron Keller