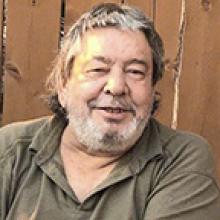 
James passed away peacefully in Grace Hospital after living with cancer for 5 years. He was 66.
Corky is survived by his son Michael Gladue and partner Alexandra Fisher of Ridgetown, Ontario; grandchildren, Paige & Lincoln; his four sisters, Arlene Bursheim in Montana, Terrie Green (Lyle) in Richer, MB, Tracy Thompson in Kelowna, BC, and Tammie Lepine in Wpg; as well as many nieces and nephews. He will be missed by his long-time friend: Ron Prairie, and good friends Wally and Yvette Slobodzian, neighbours Raf and Rosey Wika and long-time roommates Tarla & Drew. The family would like to extend a heartfelt Thank You to Tarla and Drew who helped care for James in the last few years.
He was preceded in death by his parents Ulysse Lepine (who passed in 2005) and Hazel (Ricker, 1991). His siblings: Randy Lepine (2013), Shelly Lepine (2008), Rennie (Bunny) Lepine (2018) and Trellis Hirt (2016). As well as his former brother-in-law John Turchak (2010) with whom he shared a strong bond.
Corky was born, raised, and lived in Winnipeg all his life. He had one brother and seven sisters. He was a welder, the trade he was employed in all his working life. For a number of years, he worked at New Flyer Industries. Due to progressive health issues James had to leave his job.
The family wish to express their appreciation and gratitude to his primary physician Dr. A. Haresha, and the doctors and staff at Grace Hospital.
It's unusual to have a Celebration of Life a year later but that's what the last few years have given us – a disruption of normalcy in how we live. Now that we are safely able to come together in large numbers the family decided to hold one on his birthday.
Please join us on Wednesday, June 1, 2022, at 1:00 p.m. for a Celebration of Life at Neil Bardal Funeral Centre 3030 Notre Dame Ave. A private family burial will follow at Brookside Cemetery.
If so desired, donations may be made in James' memory to Miss J. LA's Fur Babies Cat Cafe & Adoption Centre or a Charity of your choice.


Until we meet again - we will carry your memory in our hearts.
NEIL BARDAL
FUNERAL CENTRE
204-949-2200
neilbardalinc.com