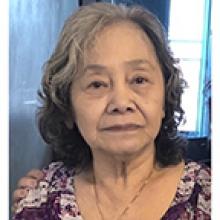 
The world lost a beloved mother, Chang Ing Louangxay, born in China on May 5, 1929, died peacefully on May 24, 2022, at Seven Oaks Hospital, Winnipeg, Manitoba.
She was predeceased by her husband Lin Su Lin in 1982. She is survived by her eight children, who made up the entirety of her world, daughter, Chien (Lieng) and grandson Leo [Atcharaporn, great-grandson Vince], grandson Ben [Madeline, great-grandchildren, Isabelle and Ezeikiel], granddaughters, Alana and Shontiana; son Kouang (Lee), grand-daughter Amanda [Tanner, great- grandson Ares], grandson Brian [Mae]; son Houa (Khamphuang), grand-daughter, Alvina [Lewis], granddaughter Alexa [Logan]; son Chong (Jaclyn) granddaughter Ciara; son Cheung (Thida), grandsons, Jonathan and J.T.; son Yae (Douang), and grandchildren, Sophia and Aiden; daughter Ing (Saeng), granddaughter Mulan [Eric] and grandson Bruce; daughter Siaomeuy (Sornsack).
Besides her children, Chang is survived by her eldest sister in British Columbia and younger brother in France, several nieces, nephews, cousins and many friends.
Chang Ing has five sisters and one brother. Chang Ing and Lin Su Lin met in Laos when Lin immigrated to Laos. Eight children were a product of their love. Lin passed away in 1982. The family left Laos to a Thailand Camp to immigrate to Canada in 1984. They became landed immigrants on May 30, 1988. She raised her kids and adjusted to living in Winnipeg weather and grateful for all the blessings the family received. A blessing of great eight children, 15 grandchildren and four great-grandchildren. She was loving and caring to all. She welcomes and cares for everyone around her. She was a wonderful mother / grandmother / great-grandmother who was always there when we needed her. She will be missed by all whom she has touched and forever be loved.
A special thanks to her son/executor Kouang, Lee and Siaomeuy for tirelessly looking after her while she was ill for almost three years. The family are very thankful to all who gave prayers for her soul and for the wonderful services at Neil Bardal Funeral Centre.
Viewing will be held at Neil Bardal Funeral Centre, 3030 Notre Dame Avenue, Winnipeg, Manitoba, R3H 1B9 on May 31, from 2:00 p.m. to 4:30 p.m. Cremation will follow right after viewing.