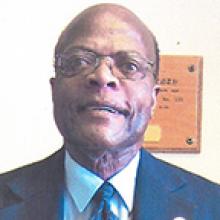 
Tom Osmond Millington was born September 20, 1937, the 11th and last child of Selina Millington (nee Simpson) and Herbert Millington. Tom came to Canada from Guyana in 1963 to attend the University of Manitoba to further his education, where he successfully completed a degree in Commerce.
Upon completion of his degree, he worked in various venues in Winnipeg, before returning to his home country after accepting a position with The Government of Guyana in the Department of External Affairs. In this capacity he was fortunate to travel the World to such places as China, and different countries of Africa.
Tom was impressed by the culture in Winnipeg, therefore he returned after his many adventures worldwide. He was employed by the Provincial Government of Manitoba in the Department of Finance until his retirement.
Tom was very active in the community at large in various organization as follows:
Founding member of ACAM (Afro Caribbean Association of Manitoba)
Board member of the Guyanese Cultural Org of Manitoba and also the Budget and Finance Chairperson
Board member of FOLKLORAMA (Folk Arts Council of Manitoba) in several capacities
Member on the Board of Governors of the University of Manitoba
Performing member of The Winnipeg Steel Orchestra
Member of The International Students Association of Winnipeg
to name a few.
Tom loved life and lived it to the fullest. He was always fully engaged in every encounter. His presence was immediately felt when he was around by his laughter, wit and conversation. He was a formidable debater and food connoisseur.
Tom is survived by his sons, Keith Anthony Millington and Michael Andre McFarlane, his grandchildren, Olivia and Maxwell McFarlane, nieces and nephews, Marilyn Barry-Webster and Allison Barry, Faye Homer-Grey and Renford Homer, Janice Ramsay-Louis and Douglas Ramsay, Colin and Terrence Washington and Lorna Angoy-Jones, Gregory Angoy and their eight other siblings, his great-nieces and nephews, Quincy Barry, Aaron Homer, Danielle Ramsay, Denise Jones-Rasmussen and 38 others, his sister Nella Washington and cousins, Lynette Heywood, Winnifred, Geraldine and Sydney.
The family of Tom Osmond Millington would like to thank all of his many friends for their love, support and prayers during this difficult time.
In keeping with Tom's wishes, cremation will occur privately. There will be no memorial service.