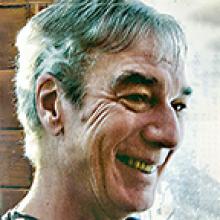 
On May 26, 2022, John passed away peacefully in his home, surrounded by his beloved and loving wife of 53 years, Barbara and their three daughters, Catharine, Maria and Kristen.
John was born in Winnipeg on June 8, 1947 and raised first in St. Vital and then in St. James. He attended Assiniboine School, St. James Collegiate and the University of Winnipeg Collegiate. After attending the University of Manitoba for a few years, he found his calling in a position as a Juvenile Counsellor at the Manitoba Youth Centre. He loved working with the kids there, who became important teachers to him, and appreciated co-workers like Wayne, Sally, Gloria and his car-pool buddy, Ross. After his retirement in 2000, he made looking after Barbara his full-time job.
John loved living "out in the country" and always said that as soon as he was home, he was on holiday. A lover of music and appreciator of current events, their home was one where the likes of Bon Iver and The Cult could be heard a mile in any direction, and one was expected to have an opinion at their lively dinner table.
John was predeceased by his parents, Alice and Stan Bromilow and his brother David. He is survived by his brother Michael and his partner Gloria; five-and-a-half grandchildren and numerous in-laws, nieces and nephews.
John left an important and lasting mark on the lives of his friends and family and will be dearly missed by those who knew him.
In lieu of flowers, please consider a donation to Darcy's Arc (Donate (darcysarc.ca)) or 1 Just City (Donate | 1justcity).
A celebration of John's life will be held on Thursday, June 2 at 2:00 p.m. at Seasons Funeral Chapel, 576 Balsam Crescent in OakBank, Manitoba.
This obituary may also be viewed at seasonsfunerals.com for further details and a place to share memories.