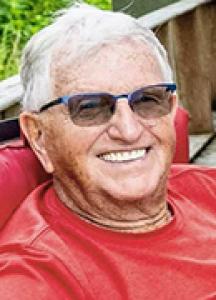 FRANKLIN: Brian Douglas Franklin of Deloraine, MB passed away peacefully at the Boissevain Health Centre on Thursday, May 5, 2022 with his wife Val, and family at his bedside, after a brief battle with cancer. He was 19 days short of his 75th birthday. Brian was born in Deloraine on May 24, 1947 to Peter and Anna Franklin (Rushton) and was followed by brothers, Lyle (1951) and Neil (1955). He attended school in Deloraine from 1953 to 1965, and was very active in school sports, especially volleyball and football, and in minor hockey through to juvenile before taking a keen interest in refereeing hockey, which he did at several levels over the course of the next 30 plus years. After completing high school Brian enrolled in the Education Faculty at Brandon University where he attained his teaching certificate in 1966. His first teaching position was in Virden, MB at Virden Junior High where he taught Grade 6 for two years before accepting a teaching position in Deloraine, which eventually led into an administrative career that spanned 33 years and ended with his retirement in 2002, after 35 years as an educator. Brian and his first wife Claudia (Bell) were married in 1967 and had 2 children - Tony (1970) and Carrie (1974). They were married for 43 years until Claudia's untimely passing on January 30, 2010, at the age of 63. This was an extremely difficult and sad time for Brian as Claudia had so much enjoyed travelling with him to several Hockey Manitoba and Hockey Canada events and family 'get-a-ways' over their years together. As time passed, Brian found love and happiness again with Val (Sando) – a love that grew and evolved into a second "true love" for each of them, and they were married on September 19, 2015. Though their years together were far too few, they always focused their love and attention on their children, step-children and step-grandchildren, taking in as many of their activities as was possible. Further to that, they often travelled together to Hockey Manitoba and Hockey Canada activities and events Brian was involved with over the years, and winter get-aways to Maui, Mexico, Jamaica and Palm Springs - memories to be cherished forever. Brian played a huge role in the game of hockey in Manitoba for over 50 years. He began officiating at age 15, and eventually earned his Level 5 Referee Certificate. During his 30 plus years 'calling games' he had many refereeing highlights, from officiating in the Canada Winter Games in Brandon, to Junior games in the MJHL, and at two US Division 3 College National Championships. It didn't take long for Brian to become involved in the administrative part of the game as well. Over the years he managed Tony's hockey teams from Atom to Midget, while serving on the Deloraine Minor Hockey Board as Vice-President from 1981-1987. He then became a dedicated volunteer within the Manitoba AAA Midget Hockey League, holding the positions of Secretary/ Treasurer, Referee Co-ordinator and President. Brian's interests in hockey also took him to the Senior Hockey level within Manitoba, serving as Treasurer for the Deloraine Royals for 25 years, Senior Director for Hockey Manitoba from 1990 - 1997 and then Chair of Senior Hockey for the Provincial Branch. After 20+ years on the Board, Brian was elected Vice-President of Hockey Manitoba from 2005 - 2007. In 2007, he became President and served as leader of the organization until 2012. During those years tremendous growth was attained in the Player, Coach and Officials Development programs. Throughout this time frame Brian also sat on numerous Boards at Hockey Canada, and he was directly involved in major events on the World and Olympic stages. Brian continued to serve as Past President for Hockey Manitoba for two more years, and his last volunteerism involved serving on Hockey Canada's "National Appeal Board" from November 2017 to October 2020. For his 27 years of voluntary service to the game of hockey Brian was recognized as the inaugural recipient of the "Frank Mckinnon Award" in 2015, and was also named an Honourary Life Member of Hockey Manitoba. Further to this, Hockey Canada awarded him it's "Order of Merit" (Western) in 2021 for his contributions to the game in Western Canada. One might think that 'enough is enough' volunteering for one person, but not Brian – he took on the position of President of the Tiger Hills Senior Hockey League in 2020, until his illness prevented him from doing so in January of 2022. It is important to note that during Brian's 27 years of hockey volunteerism he also spent 24 of those years on Council for the town of Deloraine (1994-2014), including 16 years as Mayor, and then 4 years on the Municipality of Deloraine-Winchester Council (2014-2018). Until his passing, Brian continued to serve on several local boards, including the Deloraine Golf Course Executive, as he was a passionate golfer "in his spare time"! Brian was predeceased by his first wife, Claudia, his father (Peter) and mother (Anna), Claudia's parents, Clint and Ruth Bell, and Val's parents, Lorne and Margaret Sando. Brian leaves to mourn his passing his wife Val; his son Tony (Valerie), and grandchildren Abbey, Grady and Hallie; his daughter Carrie (Rod Jardine), and grandchildren Dylan and Bauer; his brothers Lyle (Elaine) and Neil (Pat); his brothers and sisters-in-law Harland (Judy) Bell, and Cal (Diane) Bell; his step daughters and step-nieces and nephews Coral (Curtis Clarke), Cambria, Cassidy and Charlie; Crystal (Patrick Linton), Elliot, Graham and Kathryn; Candice (Manshreck); sisters-in-law and brothers-in-law Rosemary and Keith Sambrook, and Gord and Jan Sando; and many nieces, nephews and grandnieces and nephews, as well as numerous special friends. Our family would like to recognize and thank Meghan Vandenberghe, Brian's "angel nurse", for all she did to keep Brian comfortable while he was at home, and Dr. Nell and the nurses and support staff who cared for him so compassionately and professionally during his short stay at the Boissevain Health Centre. A grave-side service for Brian's immediate family was held at the Deloraine Cemetery on Saturday, May 14, followed by a "Celebration of Brian's Life" at the Deloraine Winchester Community Complex. Memorial donations in memory of Brian may be made to the Deloraine Golf Club, Box 746, Deloraine, MB ROM OMO or the Bren-Del-Win Centennial Library, Box 584, Deloraine, MB ROM 0M0.

Expressions of sympathy may be made at
Smith Funeral Home
www.wheatlandfs.com