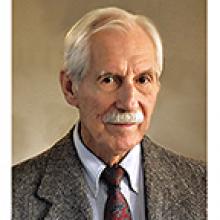 
Ron Aftanas passed away after a brief illness at Concordia Hospital on May 26, 2022.
Left to mourn are Lavinia (Livvy), his wife of 67 years, sons, Brian and Alan, his grandchildren, Katherine, Jennifer, Kevin and Laurie, their partners, his great-granddaughter Avery, two brothers, Marion and Bernard (Bernie), three sisters-in-law, many nieces and nephews and many friends. He was predeceased by his sister Emily Kardash.
Ron was born on November 26, 1931, in the North End of Winnipeg to Ukrainian immigrants. He graduated from Saint John's High School in 1948. He worked first at Winnipeg Hydro and then for the City of Winnipeg government, retiring in 1991 as the General Manager of the Staff Training and Development Department. Ron's role at Winnipeg Hydro included being a union negotiator for CUPE. This experience gave him a lifelong empathy for the people who worked for him after he moved to the management side of the negotiations table. He was a much-loved supervisor.
Ron's life was one of generosity to his family, friends, church, and dozens of charities. He and Livvy treasured the closeness and importance of family, hosting annual family events such as their enormous annual meatless Christmas Eve banquets, Grey Cup Parties, and champagne celebrations. He volunteered at soup kitchens, was president of his cottage owner association, chaired and emceed the CUPE Awards program among other things. As a respected leader and talented negotiator, he navigated cottage owner association land deals, licensing agreements and fire and police services programs. These things he did all the way into his late 80s.
Central to his life was his attendance and involvement with his Church. He honoured his Ukrainian heritage. In early years he was president of the Youth Club at the Sts. Vladimir and Olga Cathedral. As their earnest Youth Club president, he recruited Lavinia to fill in for an absent player on the Bowling League. They married in 1955. In later years, he was a respected leader who oversaw many committees and programs at Holy Eucharist Parish.
In the early 1960s Ron and Livvy purchased a cottage on a lake a little east of Kenora, Ontario. The cottage was Ron's focus for weekends and vacation. He relished raising his sons there and, later, enjoying his grandchildren. He was an avid fisherman and once held the Provincial record for the season's largest Jack Fish. His grandchildren looked forward to going fishing with him, which he encouraged enthusiastically and taught them his secret "Here, Fishy, Fishy" technique which seemed to work magic.
In addition to the cottage, Ron and Livvy were avid travellers visiting Europe, Asia and elsewhere. They also took at least 15 cruises together. Ron was an avid runner long before the word "jogger" was invented. He told fascinating stories of running through the streets in China in the early 1980s. He ran into his 70s.
Funeral services will be held at Holy Eucharist Church on Saturday, June 11 at 10:00 a.m. The service will be live streamed from their https://holyeucharist.ca website. A reception will follow at the Holy Eucharist Parish Centre. All are welcome to attend.
In lieu of flowers, the church has envelopes to donate to support Ukrainian refugees. Alternatively, donations via the "Catholic Near East Welfare Association Canada" are welcome. Both formats of donation are tax deductible.