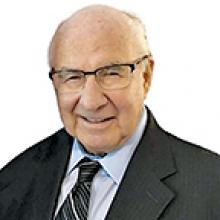 With profound sadness, we say goodbye to our beloved Dad, Papa, Uncle, and friend who passed away peacefully, with family by his side.
Left to cherish his memory is daughter Kelly and husband Larry (Tara, Landon, Breanne), sons, Scott and wife Krystal (Megan, Katelyn), Paul and partner Shelley (Alexis, Jimmy, Jodie) and Reed (MacKenzie), daughter-in-law Brenda (Madison, Brandon) and 11 great-grandchildren who stole Papa's heart. Wayne also leaves behind nieces, nephews, in-laws and many dear relatives and friends.
It's comforting knowing Wayne will be reunited with his wife, Helen, who was the love of his life. The reunion will be met with beautiful anticipation as they resume playing crib, walking on the beach, golfing, and waltzing to Frank Sinatra, all the while playfully teasing each other. He will also be reunited with his parents, Hector and Freda, brother Ken, sister Phyllis Joanne and son Parker.
Growing up in Selkirk, Wayne was a sport enthusiast and an athlete - he enjoyed golf, baseball, curling, hunting, fishing but his true passion was hockey. Pursuing a hockey career, Wayne ventured off and played with the Brandon Wheat Kings, Killarney Shamrocks, American League in Washington and in Scotland, UK with the Kirkcaldy Flyers. He continued to play hockey with the Selkirk Seals and the Selkirk Settlers Old Timers until he was 65, which was a special time for him. "The Coach" cherished the camaraderie and banter among teammates as he flexed his competitive moxie.
Upon returning to Selkirk from Scotland, Wayne's courtship with Helen began at an innocent dance in 1957. A year and a half later they danced into marriage and for 57 years loved each other unconditionally, raised five children, laughed and played, and always devoted time to each other.
Wayne's working career began in 1956 as a Postal Clerk. During that time, he attended night school for Accounting at Red River College. After graduating, he was promoted to a leadership role - Supervisor, Finance. Four years later, he accepted a position as Secretary-Treasurer at the Lord Selkirk School Division and retired in 1994 after 27 years. Following retirement, he continued to work as a School Board Trustee. In 1981 he was President of the Manitoba Association of School Board Officials and throughout his career was a mentor and admired role model to many.
Wayne adored the community he was born and raised in, and as such, felt strongly about giving back to Selkirk organizations such as Ducks Unlimited, Kinsmen, and junior hockey organizations for which he was an active member. He was a founding member of the Music Appreciation Club in 1968, and always enjoyed the birthday party celebrations that were so widely anticipated. In the early 1950s he started devoting his time to the Selkirk Golf and Country Club (SG&CC) by participating on committees and as a member of the Board of Directors (1975 to 2007). Between 1983 and 1988 he was President and was instrumental in the construction of the present clubhouse. In 1992 he was awarded a life-time membership for his involvement with the SG&CC by the Board of Directors.
It was important to Wayne to connect with people. Cultivating strong, loving relationships with family and friends was a core value. He warmly welcomed drop-in visitors, and always made time to say hello and "catch-up". He was a remarkable conversationalist - his genuine care and curiosity for the well-being of others allowed him to listen without judgement, seek to understand, and learn from people which always ended with a firm handshake/hug and a kind word.
Wayne and Helen shared a passion for travel near and far and frequently explored North America and Europe. They always made the effort to stay connected and visit relatives whenever possible. Wayne's passion for family and inquisitiveness of origins, made him the patriarch of the family tree. He was tremendously proud of his heritage and was quick to share his knowledge to encourage awareness, especially with his grandchildren, who always brought him happiness as he cherished spending time with them.
His family would like to thank the community for the out-pouring of support shown to Wayne and his family. Special appreciation to the Doctors and Nursing staff at the Selkirk Regional Health Centre and Home-Care Attendants, especially Alvin and Fatima for their compassion and care. We will always be grateful for the fellowship shown to Dad by his neighbours at Cambridge House.
A celebration of Wayne's life will be held on Wednesday June 15, 2022 at 2:00 p.m. at Good Shepherd Lutheran Church, 106 Sawchuk Drive, St. Andrews. (South of the Rolling Mills on Highway 9). Masks will be required. The service will be livestreamed via a link on his obituary on Gilbart Funeral Home's website.
In lieu of flowers, and keeping with Wayne's wishes to support the community, donations are graciously accepted to the Selkirk and District Community Foundation, 200 Eaton Ave., Selkirk, MB R1A 0W6 or at on-line www.sdcf.ca (donate today-Endow Manitoba).


Condolences may be left on his tribute wall at www.gilbartfuneralhome.com
Gilbart Funeral Home, Selkirk in care of arrangements.