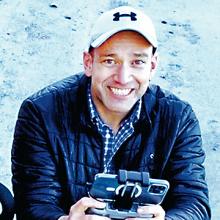 
It is with profound grief that the family of Ryan Bourke Craig mourn his passing on May 14, 2022.
He is survived by his beloved mother Linda; brother Colin (wife Rebekah, niece Jane); uncle Lou Hogue; his best friend Dr. David Gratzer; cousins and friends; and his loyal cocker spaniel Higgins. Ryan was predeceased by his beloved father Keith Craig (August, 2021).
Ryan was born (1975) and raised in Winnipeg. He was his high school Valedictorian, the youngest president of the youth wing of the PC Party of Manitoba and co-chair of a federal riding campaign - all before the age of 19.
After graduating from the University of Manitoba, he held positions with key provincial ministers in the Manitoba Filmon Government. Opportunity took him to Toronto, where he held senior political positions in the Harris Ontario government, working for several Cabinet ministers. Still in his 20s, he returned home to Winnipeg and became chief of staff to Mayor Sam Katz. Needless to say, Ryan was passionate about politics, both Canadian (Federal, Provincial, Civic) and American as well as worldwide. He loved nothing better than a good political debate, as family and friends can attest. He always credited his Dad with instilling in him the love of politics. The Winnipeg Free Press once called him a "strategist and political mastermind" and he was named among the "30 most powerful in Manitoba."
Ryan was very proud of his "BOURKE" Selkirk Settlers ancestry. He was a direct descendent of Edwin Bourke, a member of the first Legislative Assembly of Manitoba. Politics was in Ryan's blood! Subsequently, his career centered on being a strategic communications advisor; he counselled national and international corporations.
Ryan was a visionary both in politics and in life. He saw the Big Picture and the endless possibilities of what could be. He creatively pondered challenges and solved problems and would always come up with a viable solution.
Ryan had a zest for life and enjoyed the countless opportunities life presented him in his young 46 years. He was proud to have been a member of the Ontario delegation to Russia for the Olympic bid. He was also invited by the US Ambassador to Canada to participate in their International Visitor's Leadership Program for "up and coming foreign leaders."
Ryan was loving, compassionate, loyal, intelligent, generous, fun loving, very sociable and gifted with many talents. He took unique, beautiful landscape and cityscape photos, often using his drone. He was the family/friends' computer whiz and loved all things Apple. His BBQ meals had flare. He could recite from memory long portions of speeches made by men he admired - Winston Churchill, Ronald Reagan, JFK, Steve Jobs, among others.
Though he travelled the world and held important jobs, he always made it home for Christmas dinner, bringing thoughtful gifts for his family.
Most of all, Ryan was a loving son of whom both his parents were very proud.
In lieu of flowers, the family asks that "In Memorium" donations in Ryan's name be made to the Prairie Wildlife Rehabilitation Centre Winnipeg, the Winnipeg Pet Rescue Shelter, or a charity of choice.
In keeping with Ryan's wishes, there will be no funeral service. Rather, he wished friends and family to recall the many memorable and fun times they had shared with him.


Condolences may be sent to www.wojciksfuneralchapel.com
"Your light and love will live on forever
in our hearts and for eternity."