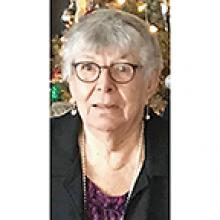 
With profound sadness, we announce the passing of Gladys Jane Bodnarus on Saturday, June 4, 2022 at Concordia Hospital.
She leaves to mourn her sisters, Rose and Eugenia (Dave); brother Melvin and sister-in-law MaryAnn. She is also survived by seven nieces, five nephews, seven great-nieces and eight great-nephews. She was predeceased by her parents, Peter and Pauline (Shyk) Bodnarus; her brothers, Adam and Walter; her sister Mary (Walter) and sisters-in-law, Violet and Ruth.
Gladys was born at the Hunter Memorial Hospital in Teulon on April 18, 1941, the fifth child and third daughter in a family of seven. She attended grades one to ten in Komarno, MB and grades 11 and 12 at Teulon Collegiate. In 1958, she attended Manitoba Teachers College and secured a teaching position for grades one to eight in a one room school from 1959 to 1960 at Netley School. The following year, she taught at Kirkfield Park School with the St. James School Division. In 1963 to 1965, she taught at Crestview School and from 1965 to 1969, she was off to Europe for a teaching position with the Department of National Defense. She taught 1965 to 1967 in Marville, France and 1967 to 1969 in Lahr, Germany. She travelled extensively throughout Europe and experienced many wonderful adventures during this teaching sojourn.
She returned to teach in Canada in 1969, securing a position with the St. James School Division, teaching at Hedges Junior High until 1976, when she transferred to Westwood Collegiate until 1983, then to Silver Heights Collegiate from 1983 to 1989. From 1989 to 1992, she taught at John Taylor Collegiate. In 1993, she taught Special Education and became an Employment Specialist and Coordinator for Special Needs. In 1996 she became the Leader in Resource, Guidance Counsellor, Attendance Officer, and the Employment Specialist for the Work Experience Component of the Special Needs Program. She retired from her Education career in June 1996.
After retirement, she contributed many hours volunteering to numerous organizations; Cancer Society, Heart and Stroke and Humane Society were dearest to her heart.
She was kind-hearted to a fault. She loved her family, helping when she could, always interested in their ventures and adventures and encouraged everyone to pursue their dreams. We will miss her dearly.
The family would like to thank the following Home Care staff for their care and support, Naomi, Sam, Kim, Jocelyn and Ricki.
Flowers gratefully declined; donations can be made in her memory to a charity of your choice.