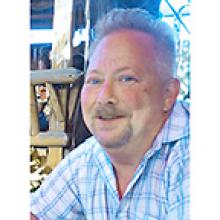 
Allan passed away peacefully in his home surrounded by love June 5, 2022.
Allan was born on January 27, 1964 in Winnipeg, and is survived by his loving wife Leah; stepdaughters, April Lazar, Rebecca Lazar (Mark Wedman); granddaughters, Bella and Sophia; his mother and father, Len and Dorothy Martin; sisters, Lynn (Don) Horton, Shannon; brother Earl (Cha); brothers-in-law, Tim Kramble, Glenn Young; nieces, Mikaela, Kristjana Reinert (Keith) and girls Kadie and Kaylei, Ayla and her son Alex. He was predeceased by sister Tracey Kramble; mother and father-in-law, Ervin and Viola Young; brother-in-law Brent Young; stepson Mark Lazar; and both maternal and paternal grandparents.
Allan grew up in Wildwood Park and began his working career with Manitoba Hydro then left Hydro and began a 30 year career with Environment Canada retiring one and one half years ago. He loved his job as a radar tech but was unable to continue in that field after suffering heart difficulties.
Bodge was a kind and gentle soul who had a large range of friends who all called him a good guy. Leah and Bodge met in Saskatoon and soon began a loving and solid relationship. They married in 2001 and settled in Windsor Park for 21 years and in November 2020, retired to Gimli, Manitoba.
We can't end this obituary without mentioning his good friends, some of which included the Saturday morning breakfast club, the hockey draft buddies and his wonderful friends both in Manitoba and out of province. He will be so missed, a big hole has been left in our lives. He went knowing he was much loved. The two short weeks we shared after his lengthy two month stay in hospital was a precious time.
I want to thank the Gimli Home Care nurses, as well, Christina and Sandra, who made his days more comfortable and the Interlake East Palliative Care Team who were so kind and helpful.
A gathering of friends and relatives will take place at a later time.


Love you my darling, rest easy,
you deserve some peace.
Condolences may be left on his tribute wall at www.gilbartfuneralhome.com