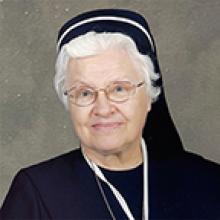 
Sister Andrea Helen Kruk, a Sister Servant of Mary Immaculate, passed away at Bethany Home, Winnipeg MB, Canada on June 9, 2022 she was 91 years old, and 62 years in religious life.
Helen was born in Winnipeg, daughter of Peter Kruk and Mary (nee) Martyn. Her parents immigrated from Sokal region in Ukraine in 1928 and settled in Winnipeg. They raised three children: Helen, Irene, and Myron. The Kruk family were faithful members of Sts. Volodymyr and Olha Cathedral.
Helen's mother worked with the Sisters Servants at St. Nicholas School, so Helen knew the Sisters even before school age. The seed of her vocation was planted in her heart early. She often helped the Sisters in various ways.
As an adult, Helen worked as a clerk typist for The Canadian Chemical Company in Edmonton.
Helen also had a passion for singing, a love passed on by her mother who performed in operatic productions. Though Helen aspired to make a career in the performing arts, the Lord gently changed her plans.
Helen entered the Sisters Servants on January 10 1960, and in July she received her habit, taking the name Sister Andrea. She made first Profession of Vows in 1962 and Final Profession on August 15, 1967.
Sister Andrea's biggest ministry in Community involved office work. She was mostly in the service of the Ukrainian Catholic bishops in Saskatoon, New Westminster and Edmonton. In Edmonton she handled correspondence for Bridge of Hope, an eparchial organization working with the Sisters Servants in Ukraine, to help children in need. She also worked in Rome for the Catholic Near East Welfare Association (CNEWA), a papal agency supporting Eastern Churches. She served her community with her office skills in St. Joseph's Children's Home in Mundare AB, at Sacred Heart High School in Yorkton SK, and at Bethany Home in Winnipeg.
Sister Andrea was engaged in the hospitality ministry in Lourdes and Mackwiller, France and she also served her community in domestic work in Toronto and Ancaster ON. Singing remained a special part of Sister Andrea's life. She belonged to several renowned choirs and taught singing to children at summer camps and catechism classes. She led sung prayers at Sisters' gatherings.
After a hip replacement, her mobility became more difficult but her dedication to intercessory prayer was strong and evident. During her own brief battle with cancer, she maintained a tender trust in her Lord.
Sister Andrea is predeceased by her parents, Peter and Mary, her brother Myron and his wife Olga. She is survived by her sister Irene, nephews Borys, Yuri and Paul, their families, and her community of Sisters Servants of Mary Immaculate.
Prayers are at 6 p.m. June 14, and Funeral Divine Liturgy at 9:30 a.m. June 15, at Bethany Home, 131 Aberdeen Ave. Gratitude goes to Sister's caregivers.


May the memory of Sister Andrea be eternal.