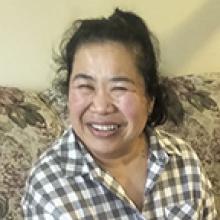 
It is with great sadness that we announce the passing of Josephine Aldenese, on May 14, 2022, at the Health Sciences Centre, at the age of 55.
Josie was predeceased by her parents, Nicolas and Exequila Aldenese; and her sister Justinieta de Chavez (Jenette, Kevin and Kim). She leaves to mourn her sister Teodora Tubog, (Joselito); niece Lemarie Pama (Jun) and their children, Liam and Liza; her nephew Jovanni Tubog (Aileen); brother Jupiter Aldenese; and her dear friends, Gail Asper, Michael Paterson, as well as Stephen and Jonathan Paterson, for whom Josie was a second mother. Many other friends, including Revi Chua and her family, mourn Josie's passing as well.
Josie was born in Dauin, Negros Oriental in the Philippines on August 27, 1966. She was a bright student and was her elementary school valedictorian. She was renowned as a hard worker who always put the needs of others ahead of her own. She moved to Hong Kong to work as a nanny for four years, always sending funds home to support her family. In 1989, she moved to Winnipeg and began a long career as housekeeper, nanny and homecare worker, again working very long hours to be able to send money back to family in the Philippines.
Josie joined the Asper/Paterson family as their housekeeper and nanny in 1991, and for 21 years dedicated her life to managing every aspect of this busy household. She was extremely capable at handling any task or activity and also ably raised two dogs in addition to her household and childcare responsibilities. She also had a large number of dogs under her care at home.
Although Josie was a proud Filipina and always maintained an interest in her country's politics, she was also very happy to become a Canadian citizen in 1995.
Despite suffering from fatigue and headaches later in her career from an epidermoid brain tumour, she never once missed a day of work, or came in late. Her work ethic and sense of duty and responsibility were remarkable.
Josie also contributed to her community by volunteering at Harvest, Agape Table and Tova Café.
Josie had a wonderful smile and infectious laugh as well as the ability to care for, and raise children, in a loving and effective way. She was famous for her delicious banana bread and chocolate chip cookies, which disappeared as quickly as they were made.
She was an avid reader, an enthusiastic shopper for designer shoes and a movie lover, especially James Bond and other action films, as well as Filipino TV shows.
She was extremely fond of, and good at, doing word searches and had a decades-long love affair with the Chicago Bulls and Michael Jordan. She also truly enjoyed her favourite foods including fresh mangoes, Jollibee's and A&W Chubby Chicken.
This past year, Josie spent time in BC with the Rosales family, who cared for her lovingly and ensured she spent time in the mountains, which she never tired of gazing at. Josie took great joy in spending time with her family and will be much missed by them, as well as her dear friends.
The family and friends would like to thank Dr. Karen Braun for her support and care over the past few years, as well as the compassionate care of the doctors, nurses and staff of the Health Sciences Centre's Neurology Department and Surgical Intensive Care Unit, and the many years of support from Gloria Magpali and Irene D'Souza.
Cremation has taken place and a funeral service was held on Saturday, May 21, at Mosaic Funeral Chapel.
If friends so desire, donations may be made to the St. Ignatius Church and to the Brain Tumour Foundation (https://www.braintumour.ca/).