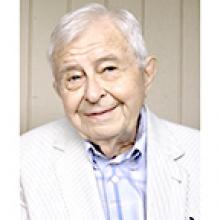 
Paul Neustaedter passed away peacefully in Winnipeg on June 8, 2022 at age 88. A survivor, educator, builder, and family man, Paul made a full life with determination and enthusiasm after a precarious childhood as an orphan and refugee.
Paul is survived by Marlene, his loving wife of 61 years, his son Carl, daughter-in-law Louisa, granddaughters, Zoe and Alexandra, cousin Peter von Kampen, and many von Kampen and Unruh relatives. He was predeceased by his daughter Karen, his brother Nick, and his cousins, Anna Fast and John van Kampen.
Paul was born near Krivoy Rog, Southern Russia (now Ukraine) into the oppression of the Stalin years. By the time he arrived in Canada in 1947, he had seen his father Cornelius exiled to Siberia, his mother Helene die from typhus, and the brutality of the Second World War. Paul and Nick were taken in by his Tante Sophie von Kampen and her children, John, Peter and Anni. Together they fled the Soviets, first to Germany, then to Canada as refugees.
Paul worked hard to support himself and family while studying evenings and summers for his Bachelor of Arts and Bachelor of Education. He later earned his Masters of Educational Philosophy at University of Wisconsin, one of his proudest accomplishments.
Paul was an enthusiastic educator. He began teaching in Grunthal, MB, where he also met his future bride, the principal's daughter. In Winnipeg, Paul taught physics at Silver Heights and Tech Voc, and geography at Daniel McIntyre, where he also produced musicals and led student trips to Spain. He retired in 1989, and in 1996 he was recognized by the Winnipeg School Division 1 as a teacher who made a difference.
Paul was an active member of First Mennonite Church. From organizing youth events to serving many years on church council and committees, Paul embraced the church community, where he and Marlene also made cherished, lifelong friends. He also helped create Westgate Mennonite Collegiate and co-founded Winnipeg Mennonite Theatre.
Paul often said life's greatest gift was to love and to be loved. He found that with Marlene Unruh, and their devotion to each other spanned more than six decades. Married in 1960, they set sail from New York in 1962 on a months-long tour of Europe. Karen was born in 1964, Carl in 1966, and the family settled into the house on Cordova Street that would see countless family gatherings, parties and meticulous maintenance by Paul.
Paul loved to build and could fix anything, from the cozy cottage at Royal Lake to many pieces of finely crafted furniture. After retirement, he opened the Cordova Gallery in his basement, framing pictures and keeping up with friends and family.
Paul and Marlene were steadfast in their support for Karen as Multiple Sclerosis stole her independence and abilities. This was something Paul could not fix, but he and Marlene showed up every single day for Karen, devoted and caring parents to her last breath.
Whether entertaining friends or his beloved granddaughters, Paul loved to tell a tale. His opinions were strongly held and freely shared, often with a Scotch. His stories were funny, thrilling and heartbreaking, full of his own spirit of survival and enthusiasm for life.
A memorial will be held at a later date.
In lieu of flowers, please consider supporting Mennonite Central Committee's Welcome Program for refugees who, like Paul, contribute immeasurably to Canada.