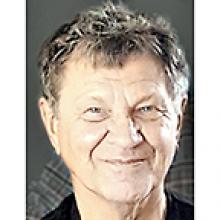 We are sad to announce the death of our dear Cas.
He leaves behind his partner Joanna Blais and their children, Alexander Peniuta (Alison Weiss), Morgan (Mugs) Peniuta and his grandchildren, the absolute darlings of his life, Edgar and Astrid Peniuta.
He is survived by his mother Stefania Pieniuta, sister Kristine Rizanow, brother-in-law Igor, and nephews, Christopher (Alba) and Erik.
He will also be missed by his brothers-in-law, Barry Blais (Linda) and Eric Blais (Mary), sister-in-law Paulette Blais (Ron) and all their children.
The Pieniuta family of Janik and Sophie, especially his godson Micheal will also mourn his passing, as well as his family in Poland.
He was predeceased by his father Walter Pieniuta.
At the age of 10, Cas came to Canada from Poland. He and his family lived in Gimli, Manitoba until he left for university, and to travel the world. Cas was a lifelong learner who studied an interesting mix of geography, languages and politics until he found teaching. He worked in Lakeshore, Evergreen, and Louis Riel (St. Vital) School Divisions, as well as 10 years at St. Amant Centre. He taught many students with special needs, and loved the challenge of figuring out how a student could learn.
For Cas, learning wasn't confined to a classroom or always bound by rules. To the despair of many janitors, his classrooms were alive with aquariums, mushrooms, insects and animals. We remember a time when he had his students at St. Amant pick and crush berries to make a bottle of wine for each of their parents.
When teaching in Fisher Branch he met the area speech language pathologist. They bonded when discussing kids. A year later they were married, and after three years they had Alexander and Morgan. He loved being a dad.
It would be impossible to list all of his interests and hobbies. His favourites were winemaking, sailing, mushroom and berry picking, and collecting radioactive rocks. Cas had an unmatched curiosity, generosity, and love of life. He was a fountain of knowledge and trivia, and could (and would) talk to anyone about anything. Though he has left behind innumerable gadgets and collections, we will miss his beautiful, brilliant mind, and above all, his kind heart.
His most loved role was being a Pop-Pop. Edgar and Astrid made his world complete. The day he became a grandparent he said, "now I see the future". His love was without restrictions. When Cas loved you, he said it, and he never held a grudge.
He left this world in peace knowing his energy would be reabsorbed into the universe.
Funeral services will be held on Friday, June 17, 2022 at 11:00 a.m. in the Gilbart Funeral Chapel, Gimli, MB. Interment will follow in the Gimli Community Cemetery.
In lieu of flowers, donations may be made to a charity of your choice.


Condolences may be left on his tribute wall at www.gilbartfuneralhome.com
Gilbart Funeral Home, Gimli
in care of arrangements.